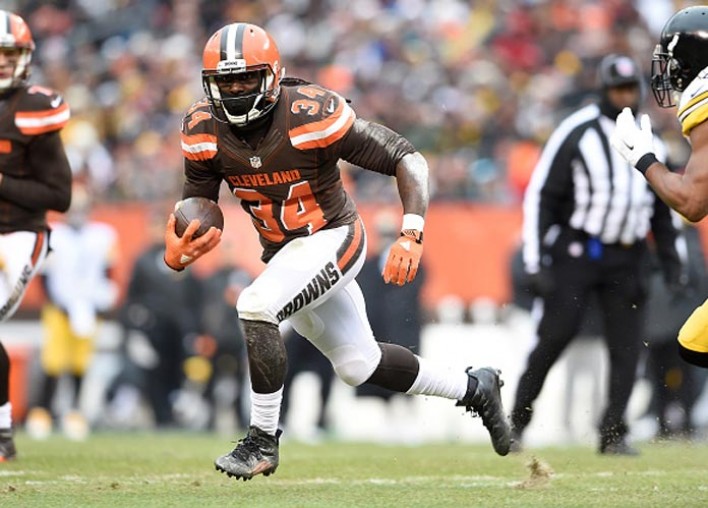 CLEVELAND, OH - JANUARY 3: Isaiah Crowell #34 of the Cleveland Browns carries the ball during the first quarter against the Pittsburgh Steelers at FirstEnergy Stadium on January 3, 2016 in Cleveland, Ohio. (Photo by Jason Miller/Getty Images)

Isaiah Crowell has already apologized for posting an Instagram photo of a police officer being killed, and his team has told him that’s not enough.

Therefore, the 23-year-old Cleveland Browns running back has vowed to donate his first game check of the season to the Dallas Fallen Officer Foundation, which supports policemen killed in duty like the five last week. Crowell posted the photo– which appeared to be a drawing of an officer getting his throat slashed by an attacker– before the Dallas shooting as a response to the police shootings in Baton Rouge, Louisiana and Falcon Heights, Minnesota.

“I know this may not change your mind about me, and I can’t take the post back. But I’m sorry, and moving forward, I’m committed to being part of the solution.”

Crowell is reportedly scheduled to earn $600,000 this year, which would put his donation at $35,294. He said raw emotion took over when he posted the image.

“I appreciate the apology and we accept it,” Loomis said. “People are allowed to make mistakes in life. Our problem was that first apology. It wasn’t sincere. But Isaiah stepped up to the plate to make a personal apology, and we definitely appreciate his donation to the Fallen Officers Foundation.”

Loomis had initially rejected the running back’s apology, and even threatened to prevent police from working at Browns home games this year. However, Crowell’s video and donation promise changed his mind.

Loomis added that he’d “love to work with Isaiah in the future.”

Browns linebacker Paul Kruger tweeted his support for his teammate on Tuesday night.

Everyone relax and cut my man Crow some slack.. He’s a good person trust me, obviously didn’t mean what he posted.

Cleveland police chief Calvin Williams said that Crowell apologized to him in a call Tuesday.

CLEVELAND, OH – JANUARY 3: Isaiah Crowell #34 of the Cleveland Browns carries the ball during the first quarter against the Pittsburgh Steelers at FirstEnergy Stadium on January 3, 2016 in Cleveland, Ohio. (Photo by Jason Miller/Getty Images)