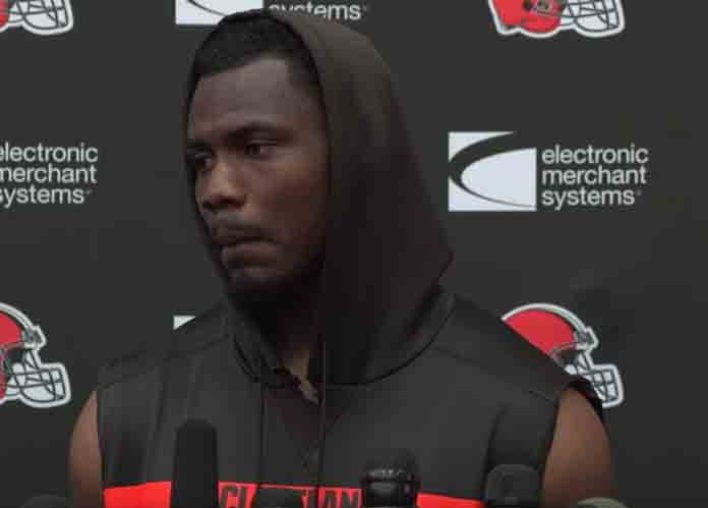 Following the Cleveland Browns‘ loss to the Denver Broncos on Sunday, fourth-year defensive back/safety Jermaine Whitehead posted a series of racist tweets and even death threats against an announcer.

On Monday, the Browns announced that they were releasing Whitehead, who had started all eight games so far for the 2-6 Browns.

During the game, Browns TV and radio broadcaster Dustin Fox tweeted out, “Whitehead’s tackling today is a joke.” Moments after the loss, Whitehead replied to the tweets criticizing his performance. Whitehead was especially aggressive and racist toward Fox, as he told the broadcaster not to “get smoked” and called him a “cracker”. His Twitter account was promptly suspended thereafter.

Whitehead escalated his language to violent threats directed towards Fox.

“Imma kill you b—… that’s on blood,” the Browns star wrote about Fox.

In response, the Cleveland Browns issued a statement calling his tweets “totally unacceptable and highly inappropriate” and affirming that the organization does not condone that type of behavior or language.

“Jermaine Whitehead’s social media posts following today’s game were totally unacceptable and highly inappropriate,” the Browns’ statement read. “We immediately spoke with Jermaine upon learning of these comments. The Browns in no way condone that type of language or behavior. This matter will be further addressed internally.”

Browns player Jermaine Whitehead just got his twitter suspended 15 min after losing to the Broncos.

Whitehead entered the league back in 2016, joining the Green Bay Packers as an unrestricted free agent. After two years with the organization, the Packers waived the safety, who then joined the Browns. Since joining the Browns, Whitehead has started every game this year, though he has had little impact on the defensive side of the ball. He has only posted 41 tackles and one interception.

Similarly, the Browns have seriously struggled this year, going 2-6 out of the gate and losing to a Broncos team that gave young quarterback Brandon Allen his first career NFL start. For a team already struggling at the halfway point of the season, this Twitter scandal with a former player is the last thing that the Browns need as they prepare to host the Buffalo Bills next week.