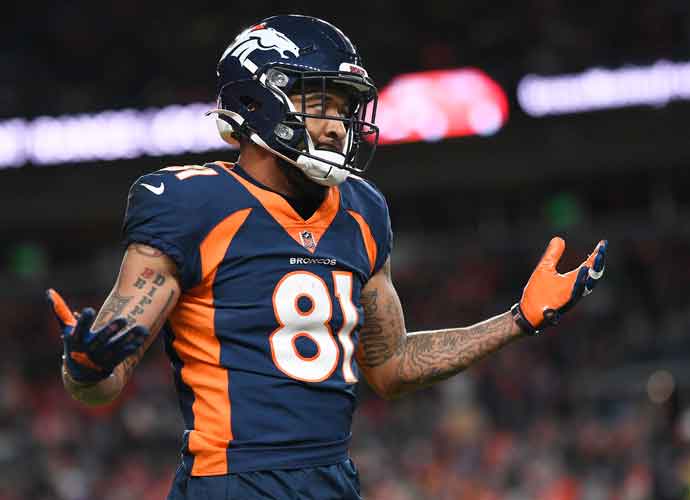 DENVER, COLORADO - JANUARY 08: Tim Patrick #81 of the Denver Broncos reacts after a non penalty call during the second half against the Kansas City Chiefs at Empower Field At Mile High on January 08, 2022 in Denver, Colorado. (Photo by Dustin Bradford/Getty Images)

One of the teams with high expectations and viable upside this season just took a massive blow. Wide receiver Tim Patrick suffered a torn ACL during training camp.

According to reports, Patrick was injured after making a catch over slot corner Essaying Bassey. When he landed and attempted to make a move, his right leg gave out. The injury is expected to cause Patrick to miss the entire 2022 season.

Patrick has been one of the team’s key locker room presences. A former undrafted free agent, Patrick broke out onto the scene after putting together two consecutive seasons of 700+ receiving yards becoming the Broncos’ most consistent receiver. This consistency earned him a three-year, $54 million extension last year.

Broncos head coach Nathaniel Hackett shared his distress on losing a player like Patrick. “Guy like Tim … it breaks your heart. The worst part of this game is when things like this happen. Tim’s a guy that’s well respected across this team, across this league,” Hackett said.

Fellow receiver Cortland Sutton also expressed the pain of losing such an important player to injury. “It hurts,” Sutton after practice. “To see a guy who works his butt off all offseason, his preparation is second to none…. [We’re] praying for the best … as we sit and wait.”

The injury to Patrick marks the third straight season that the Broncos have lost a key wideout due to injury early in the season. Sutton tore his ACL in Week 2 during the 2020 season, KJ Hamler in 2021 and now Patrick prior to the season.

According to veteran safety Kareem Jackson, practice was held up for several minutes as Patrick was helped from the field.

A potential stand-in for Patrick this season may be Montrel Washington, who has quickly turned heads in training camp this season.

“I don’t think anybody knew for sure where he was going to put himself in the wide receiver rotation, and he’s a guy that for sure Russell [Wilson] has latched on to and really tried to push with the rookies being around,” Hackett said. “It is so different coming from where he’s been, but he’s grasped it a lot and he’s made a bunch of good plays around here. We’re excited. He’s going to have to step up.”