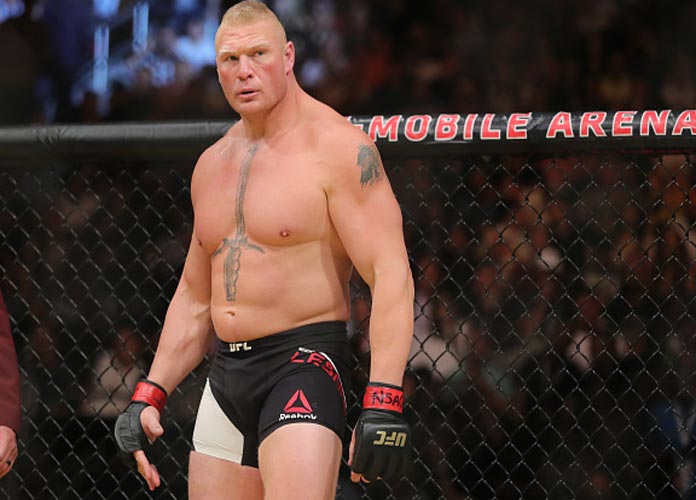 Brock Lesnar has been temporarily suspended pending a full hearing after he failed two drug tests surrounding his return to action at UFC 200 in July.

The Nevada State Athletic Commission announced during a hearing on Tuesday that Lesnar tested positive for clomiphene and hydroxy-clomiphene, which is a metabolite of clomiphene. Clomiphene is an anti-estrogen agent that is typically used following a cycle of steroids in order to prevent many of the side effects that come with the performance-enhancing drug.

Lesnar, 39, failed two drug tests — one from a pre-fight out of competition sample on June 28 and another from the night of his fight with Mark Hunt on July 9.

Lesnar won that fight by unanimous decision, although the state of Nevada has the right to overturn the result depending on the outcome of his hearing, which will be held at a later date.

Brock Lesnar has been temporarily suspended for his two UFC 200 drug testing failures. Official hearing at a later date.

Lesnar faces possible sanctions from both Nevada and USADA (United States Anti-Doping Agency), who oversees the UFC’s drug testing program. His attorney Brian Stegeman has been contacted and will collaborate with Nevada to set a date for the hearing, during which they will have the opportunity to present his defense in the case.

The fighter had already been criticized after he was awarded a four-month exemption from USADA drug testing prior to his UFC return as part of the company’s anti-doping program. Athletes are permitted such an exemption if their return to competition occurs under extenuating circumstances, and Lesnar’s deal to return to the UFC happened last-minute, ahead of the card in July.

Lesnar has also received severe criticism from Hunt, who fumed after learning his opponent at UFC 200 tested positive for a banned substance both in and out of competition surrounding their fight.

Lesnar won the match by technical knockout after bashing Orton with repetitive blows to the head. The company announced Monday that Orton required 10 staples to close a gash on his forehead.