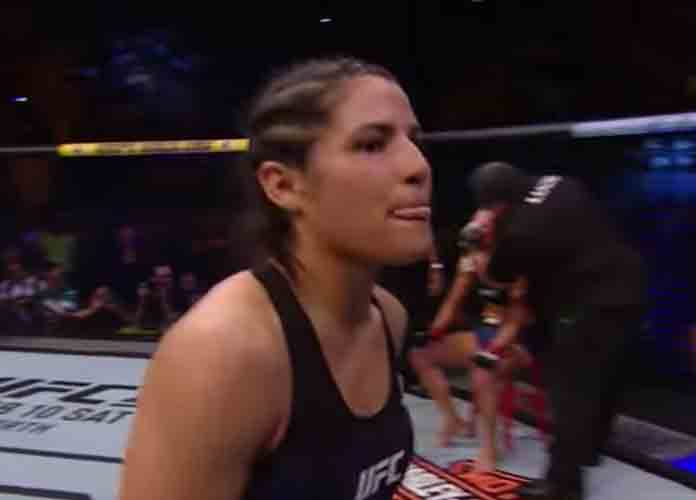 UFC star Polyana Viana proved over the weekend that she can use her mixed martial arts skills not just in the octagon, but also outside of it.

The 26-year-old fighter reportedly told MMAJunkie she attacked a potential mugger while waiting for a ride-share in Rio de Janeiro on Saturday night. The man allegedly approached Viana and asked for her phone. Viana refused and proceeded to punch him twice and kick him once. She also reportedly choked the would-be-robber and kept a tight hold on him until authorities showed up.

“When he saw I saw him, he sat next to me,” Viana told MMAJunkie. “He asked me the time. I said it, and I saw he wasn’t going to leave. So, I already moved to put my cellphone in my waist. And then he said, ‘Give me the phone. Don’t try to react, because I’m armed.’ Then he put his hand over [a gun], but I realized it was too soft.

She continued: “He was really close to me. So, I thought, ‘If it’s a gun, he won’t have time to draw it.’ So, I stood up. I threw two punches and a kick. He fell, then I caught him in a rear-naked choke. Then I sat him down in the same place we were before and said, ‘Now we’ll wait for the police.'”

UFC President Dana White shared a photo of Viana and her badly bloodied and bruised attacker on Instagram Sunday, adding the hashtag “#badf—ingidea.”

On the left is @polyanaviana, one of our @UFC fighters and on the right is the guy who tried to rob her #badfuckingidea

Viana (10-2) boasts a 1-1 record thus far in the UFC. She did not sustain any injuries in Saturday’s incident.