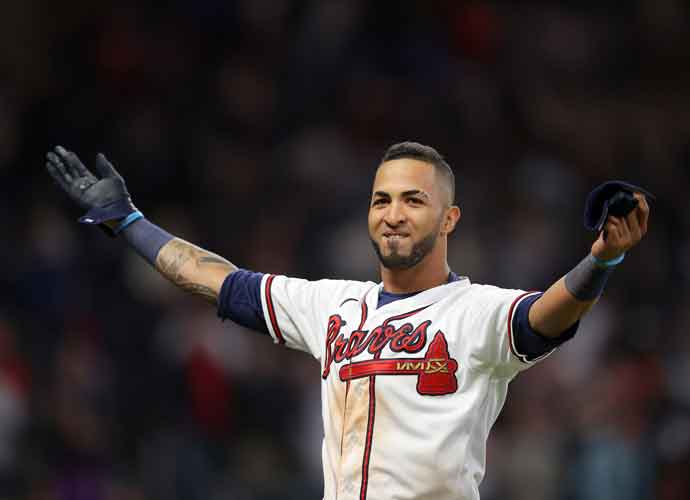 ATLANTA, GEORGIA - OCTOBER 17: Eddie Rosario #8 of the Atlanta Braves reacts after he hit a single to score the winning run against the Los Angeles Dodgers in the ninth inning of Game Two of the National League Championship Series at Truist Park on October 17, 2021 in Atlanta, Georgia. (Photo by Todd Kirkland/Getty Images)

On Sunday night, the Atlanta Braves extended their NLCS lead to 2-0 after beating the Los Angeles Dodgers 5-4. Braves left fielder Eddie Rosario lined a single up the middle, bouncing right off Corey Seager‘s glove to send home Dansby Swanson for the winning run.

Rosario’s hit capped off a remarkable individual performance, featuring a 4-5 night at the plate and some gutsy base-running.

The game itself was a back-and-forth thriller that embodied what makes October baseball so special.

The Dodgers took an early lead in the first inning when, with a man on first, Seager belted an Ian Anderson curveball over the right-field wall to put his team up 2-0.

The Braves responded in the bottom of the fourth, as Joc Pederson clobbered a 454-foot bomb off Dodgers’ ace Max Scherzer into the Coors Light Chop House Deck to tie it up at 2-2.

The score remained tied for the next few innings until the 7th inning. With two outs and the bases loaded, Chris Taylor punched a bloop double that went past a lunging Guillermo Heredia, who had just entered the game as part of a double switch, bringing home two runners to put the Dodgers back up 4-2.

However, the Braves responded in the bottom of the 8th with clutch hitting and aggressive base-running. With nobody out, Freddie Freeman flied out to left field, but Rosario tagged up from first base to narrowly beat Turner’s swipe at second.

The tag-up perfectly set up the following at-bat, whereby second baseman Ozzie Albies knocked a soft liner into short right field. Braves third base coach Ron Washington gave Rosario the green light to charge home, which fortunately worked out, as Rosario barely beat out the play at the plate.

The next at-bat, rising star Austin Riley ripped a Julio Urías fastball into the gap in left-center, scoring Albies all the way from first base to tie the game up at four apiece.

THIS GAME IS TIED!!! pic.twitter.com/M0dnJhZO9k

Then, with two outs in the bottom of the ninth, the man of the hour Rosario crushed the walk-off single off the flamethrower Kenley Jansen.

Game 3 of the NLCS will take place tomorrow in Los Angeles.

Eddie Rosario was acquired while on the injured list for Cleveland

He didn't make his Atlanta debut for a month