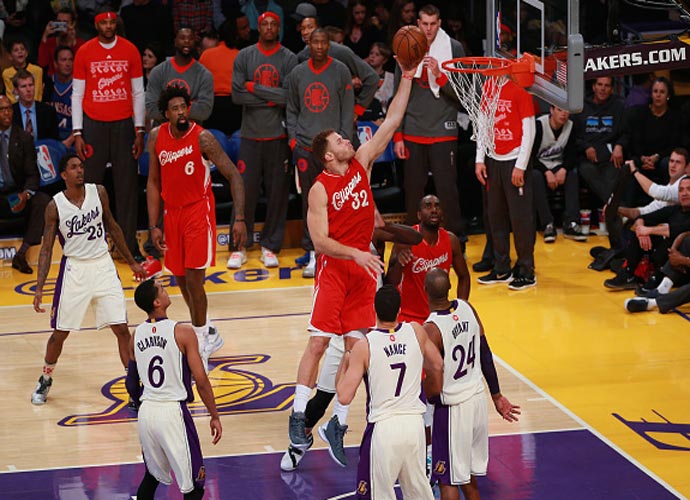 Caption:LOS ANGELES, CA - DECEMBER 25: Blake Griffin #32 of the Los Angeles Clippers jumps to the basket for a layup against the Los Angeles Lakers in the first half at Staples Center on December 25, 2015 in Los Angeles, California. The Clippers defeated the Lakers 94-84.

Los Angeles Clippers star forward Blake Griffin will now be serving punishment for his altercation with a team friend in Toronto, after he completely recovers from the broken hand he suffered as a result of the incident.

According to Dan Woike of the Orange Country Register, Griffin will be suspended four games by the NBA due to his involvement in an altercation with Clippers assistant equipment manager Matias Testi in Toronto just last week. According to reports of the incident, Griffin followed Testi outside the restaurant where they had been eating together and punched him, breaking his hand in the process. Griffin had already been recovering from a partially torn quad and was expected to return shortly, but will now be missing another four to six weeks due to the hand injury. Griffin will also be fined an additional game’s pay.

SOURCE: Blake Griffin will be suspended 4 games by the NBA (w/out pay) and will be fined another game’s pay

The Clippers have announced that their star forward will be donating his suspension fine to charity. He will not be allowed to serve the suspension until he is medically cleared. The team is now 17-4 without Griffin and are ahead of the Memphis Grizzlies for the No. 4 seed in the Western Conference. Potential trade rumors for Griffin have also arisen in light of his situation.

Griffin also took to Twitter last week to apologize for his actions. He called Testi a close friend and said the situation got out of control.