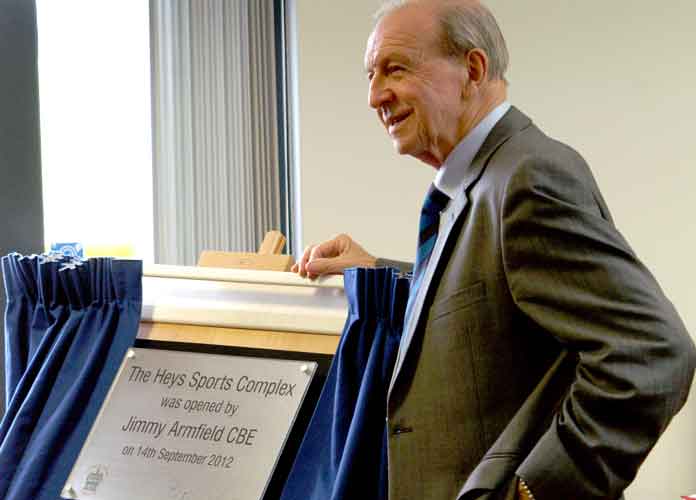 The former defender passed in his native Lancashire.

“After a long and courageous battle, our beloved husband, father, grandfather and father-in-law Jimmy Armfield, has passed away peacefully surrounded by his immediate family,” a statement from the family read. “At this time we are still in shock as we begin the grieving process. We know Jimmy was a public figure, but the family respectfully ask for privacy at this time.”

Armfield was capped 43 times by England, 15 of them as captain, and made a team record 627 appearances for Blackpool.

Afterwards, he managed Bolton Wanderers and Leeds United, and also worked as a BBC radio commentator for more than 35 years.

Among the dozens of tributes that have poured out for Armfield are one from the FA, and from Match of the Day’s Gary Lineker and Alan Shearer.

We are saddened to hear that former @BlackpoolFC & @England skipper Jimmy Armfield has passed away. Our thoughts are with his friends & family at this time. pic.twitter.com/p0iZcSBIey

Saddened to hear that Jimmy Armfield has passed away. A wonderful footballer and England captain who went on to be a terrific broadcaster of the game he loved, and, most importantly, he was a delightful man. He’ll be much missed. #RIPJimmy

You couldn’t wish to meet a warmer, more engaging man than Jimmy Armfield. A proper football man and a gentleman. #RIPJimmy

Armfield played his final game for Blackpool Seasiders on May 1, 1971, in front of a crowd of over 30,000 against Manchester United at Bloomfield Road. This marked the last game played by Blackpool in the top flight of English soccer for nearly 40 years.

He had been awarded a testimonial match the previous year on his 35th birthday, during a game between Blackpool and an International XI team before a crowd of nearly 17,000.

Club deeply saddened to learn of the passing of its record appearance holder and Vice-President Jimmy Armfield. https://t.co/60nbiaARU2 pic.twitter.com/VQayAI96WO

Sir Bobby Charlton, who played in the same Army teams as Armfield during their national service — and later beside him for England at the 1962 World Cup in Chile — mourned his former teammate’s death.

“I knew the man as well as the player, and it was not by chance that we stayed in touch for so long after we both retired,” said Charlton. “I have missed listening to his authoritative radio commentaries and now I will miss seeing Mr. Blackpool around the scene.”

Despite being a member of the 1966 World Cup-winning squad, Armfield’s toe injury prevented him from playing on the team.

When he returned as a commentator with the BBC in October 2008 following time off battling cancer, Armfield found a note for him at the media reception of Bolton’s Reebok Stadium.

“The only regret is I never won a medal with Blackpool,” Armfield stated in 2015.

Armfiedl received successful treatment for Non-Hodgkin lymphoma in 2007, although he revealed in 2016 that it had returned.

In 2010, the new South Stand at Bloomfield Road was named in his honor, and a statue commissioned by the Blackpool Supporters’ Association was built outside a year later.

PFA chief Gordon Taylor, who counted Armfield as a personal friend, said he was: “a national hero and football legend, Blackpool icon and captain of England, he will be sadly missed by all who knew him.”