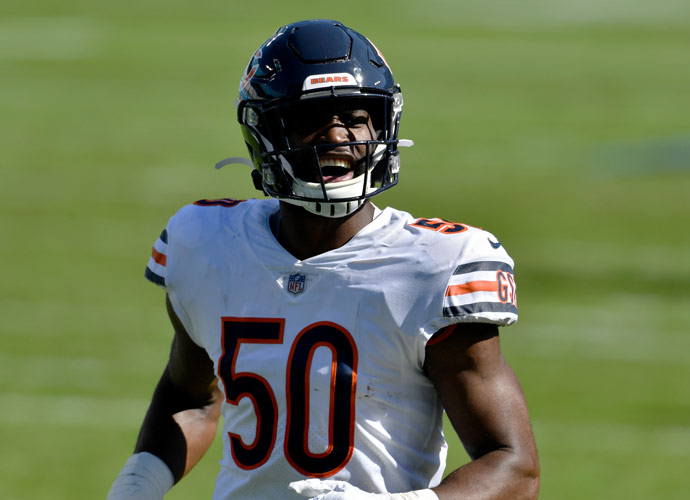 CHARLOTTE, NORTH CAROLINA - OCTOBER 18: Barkevious Mingo #50 of the Chicago Bears reacts in the third quarter against the Carolina Panthers at Bank of America Stadium on October 18, 2020 in Charlotte, North Carolina. (Photo by Grant Halverson/Getty Images)

Barkevious Mingo‘s lawyer scolded the Atlanta Falcons for dropping the veteran from the roster following his charge of indecency with a child sexual contact. “We are extremely disappointed in the Atlanta Falcons’ rush to judgment in terminating Barkevious Mingo’s contract before gathering all of the relevant facts and prior to my client having his day in court. The accusation against Mr. Mingo is a lie. Barkevious knows it — so does his accuser,” said Mingo’s lead counsel, Chris Lewis, in a statement to ESPN’s Adam Schefter.

Mingo’s charge has a maximum penalty of 20 years in prison under Texas state law. The state’s penal code states that indecency with a child sexual contact is engaging in sexual conduct with someone younger than 17 years of age or causing a child to engage in sexual conduct.

Mingo’s lead counsel claimed his client would be “fully vindicated when the truth comes to light. When that happens, the true motivation of the accuser will be clear and unambiguous.”

In March, the 2013 first-round pick by the Cleveland Browns signed a one-year deal with the Atlanta Falcons. Since being drafted, Mingo has played for many teams including the New England Patriots and Chicago Bears.