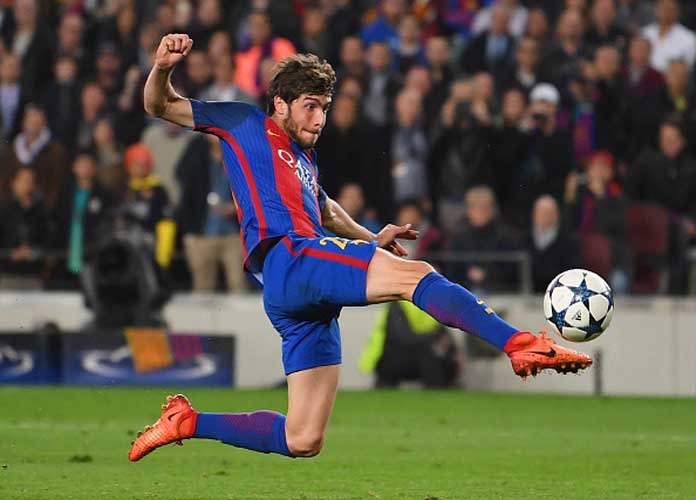 BARCELONA, SPAIN - MARCH 08: Sergi Roberto of Barcelona scores their sixth goal during the UEFA Champions League Round of 16 second leg match between FC Barcelona and Paris Saint-Germain at Camp Nou on March 8, 2017 in Barcelona, Spain. (Photo by Laurence Griffiths/Getty Images)

Sergi Roberto proved to be the unlikely hero for Barcelona on Wednesday after he scored the winning goal in stoppage time of his team’s 6-1 home victory over Paris St. Germain.

Barcelona made Champions League history with the win by becoming the first club overturn a 4-0 deficit in the first leg of the tournament’s Round of 16.

Following their 6-5 aggregate victory, the Catalan club will advance to the Champions League quarter-finals for the 10th straight season.

After Roberto’s goal in the 95th minute— his first of the season— his teammates rushed to celebrate with the 25-year-old Spaniard, who had scored on a cross by kicking the ball in before it even hit the ground, while Lionel Messi ran toward the fans. When he reached the edge of the field at Camp Nou, the Argentine jumped atop an advertising board and held his arms up high. Messi stayed there for a few seconds, then dropped to be embraced by his adoring fans.

Three weeks earlier, on Feb. 14, Barcelona had suffered a crushing 4-0 loss to the same opponents in Paris. A few days later, Barca’s manager Luis Enrique confirmed he would leave at the end of the season, stating the job had left him “exhausted.” Now, the team gave their home crowd of 96,000 a reason to celebrate.

Barcelona has been a European soccer powerhouse for the last 10 years. It boasts four Champions League titles— 2006, 2009, 2011 and 2015— and has reached the semifinals of the tournament for the past seven years.

Nevertheless, their roster is aging. Several greats have left, including Xavi Hernandez and Carles Puyol, while others are nearing the final years of their careers. Luis Suarez is 30 and Messi will reach that age in June. Andres Iniesta and Gerard Pique are past the 30 mark.

The Catalans were up 3-1 (down 5-3 on aggregate) in the 88th minute but scored three goals in the final seven minutes, including two from Neymar (one free-kick and one penalty).

Suarez opened scoring with a header just three minutes into the game, and then PSG’s French defender Layvin Kurzawa scored an own goal in the 40th to give Barca a 2-0 lead at halftime.

Five minutes after the break, Neymar fell over Thomas Meunier in the box and Messi scored the penalty to make it 3-0.

Edinson Cavani scored PSG’s lone goal in the 62nd minute, but then Neymar and substitute Roberto provided the big moments for Barcelona in the end.

There were many different ways to describe the grand comeback victory, and several members of Barcelona’s squad weighed in on the moment.

Midfielder Ivan Rakitic called it the team’s “Super Bowl” moment, with Neymar acting as Barca’s Tom Brady. Enrique described the game “Like a film. A horror film, not a thriller.” Goalkeeper Marc-André ter Stegen, abandoned his post and trotted up the field to join the celebration.

Clearly, it all felt like a dream that had not yet fully sunk in for Barcelona.

BARCELONA, SPAIN – MARCH 08: Sergi Roberto of Barcelona scores their sixth goal during the UEFA Champions League Round of 16 second leg match between FC Barcelona and Paris Saint-Germain at Camp Nou on March 8, 2017 in Barcelona, Spain. (Photo by Laurence Griffiths/Getty Images)

Read more about:
barcelona Champions League Neymar Paris Saint-Germain Round of 16 second leg Sergi Roberto
Listen to the uInterview Podcast!
Get the most-revealing celebrity conversations with the uInterview podcast!