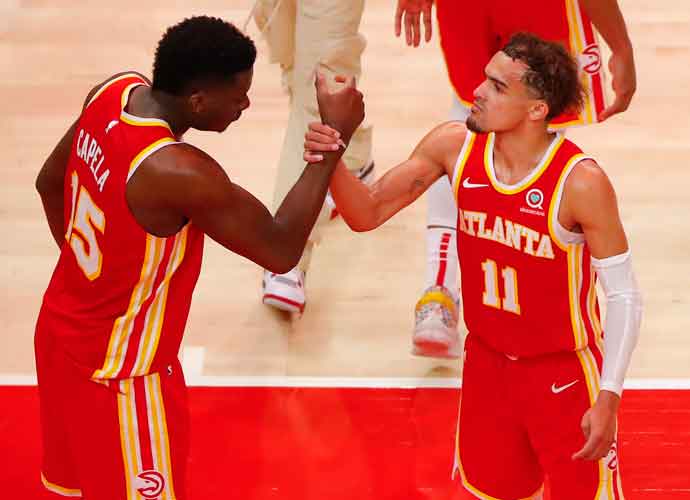 ATLANTA, GA - MAY 28: Trae Young #11 reacts with Clint Capela #15 of the Atlanta Hawks at the conclusion of the game against the New York Knicks in game three of the Eastern Conference Quarterfinals at State Farm Arena on May 28, 2021 in Atlanta, Georgia. NOTE TO USER: User expressly acknowledges and agrees that, by downloading and/or using this photograph, user is consenting to the terms and conditions of the Getty Images License Agreement. (Photo by Todd Kirkland/Getty Images)

The Philadelphia 76ers once again had the Atlanta Hawks exactly where they wanted them – and managed to let another critical playoff game slip through their collective fingertips. The end result: an early ousting from the NBA playoffs, and Philly players watching from their couches as the Hawks battle to try and compete for an NBA championship.

The Sixers had lost two of their three home games in the series; they weren’t able to turn that abysmal homecourt performance around, falling by a score of 103-96 in Game 7.

The game was incredibly tight throughout the majority of the first half. At the end of the first two frames of action, Atlanta led by just a two-point margin, 48-46. The Sixers couldn’t muster anything on offense in the third quarter (a stark difference from their Game 6 victory), and the sluggishness of the team gifted Atlanta a five-point lead going into the final quarter of play.

Despite star Joel Embiid putting on another masterful performance, his efforts alone were not enough to push Philadelphia to victory. The rest of the lineup put up just 11 points in the final 12 minutes of the game. Even though Trae Young faltered offensively, the Hawks still managed to sneak out a win on the road in a do-or-die game.

The Hawks will face Milwaukee in the Eastern Conference Finals. They will once again be the underdog against a Bucks team that is loaded with talent.