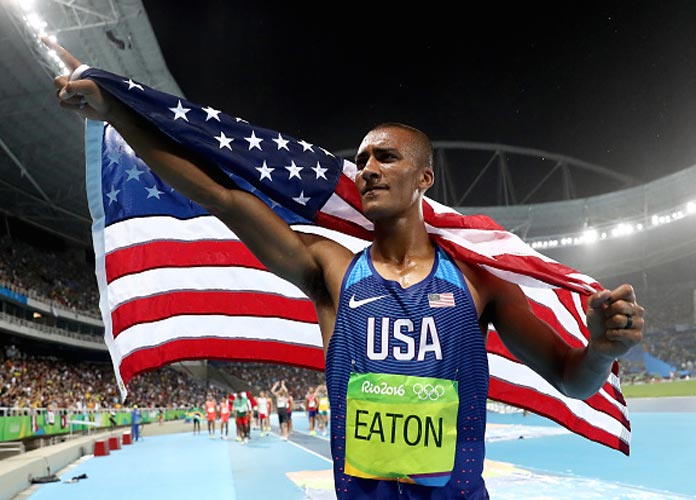 Ashton Eaton of the United States successfully defended his 2012 Olympic decathlon title on Thursday night in Rio de Janeiro, equaling the Games record with a surge on the final lap of the 1,500 meters– the last event in the two-day competition.

The 28-year-old Oregonian finished with 8,893 points to match the Olympic mark set by Roman Sebrle of the Czech Republic in 2004.

Having missed on his first two attempts at 4.90 meters in the pole vault, Eaton knew what stood in the balance should he fail in his third try at that height.

“That was the moment I thought, all right, your whole life has been about this,” he said. “Get ready. What are you going to do?”

He cleared the height. In the subsequent event, the javelin throw, Eaton faced a similar problem: he was completely unsatisfied with his first toss and was only moderately content with his second.

He entered the 1,500 meters with a 44-point advantage over Mayer.

I’m glad I passed the test,” Eaton added, referring to Mayer’s statement of putting him “to the test.”

Tying the all-time Olympic record clearly didn’t come easy for the American, even if he might have made it look simple.

“I wasn’t nervous,” he said. “I was willing to run myself into the hospital if I had to.”

Eaton has now become part of a prestigious group. He joins Team USA’s Bob Mathias (1948 and 1952) and Great Britain’s Daley Thompson (1980 and 1984) as the only two-time decathlon winners in Olympic history.

“The decathlon is exclusive company,” Eaton said. “I’m just happy to be part of the family, the decathlon family. To be with the other two-time gold medalists is great, but it’s great to just be a decathlete.”

This is just one among many of his other accomplishments, however. Eaton also boasts two World Championships and three heptathlon titles in the Indoor Championship, the latest coming in his home state of Oregon in March.

Eaton is now arguably on route to becoming one of the world’s greatest decathletes, and one of the greatest Olympians of all time.

To his coach, Harry Marra, there’s no question. He said Eaton is the greatest.

This gold was certainly even more meaningful for Marra, who is coaching in his last Olympic Games. He has tutored not only Eaton, but also his wife, 27-year-old Brianne Theisen-Eaton of Canada, who took bronze in the women’s heptathlon and lovingly embraced her husband and former University of Oregon teammate after his historic victory on Thursday night.

Eaton was heavily criticized after he was photographed wearing a Canada hat to support his wife at one of her events earlier in the Olympics, with many people calling him a ‘traitor.’

Eaton admitted, however, that it was a far more difficult path to gold than it was during the London Games four years ago.

“I think it’s clear. You win the Olympics, you win the World Championships, you own the world record,” said Lananna. “He’s got everything he could possibly be. But what the résumé will not show is how wonderful a young man he is. There’s no line in the résumé for that.”