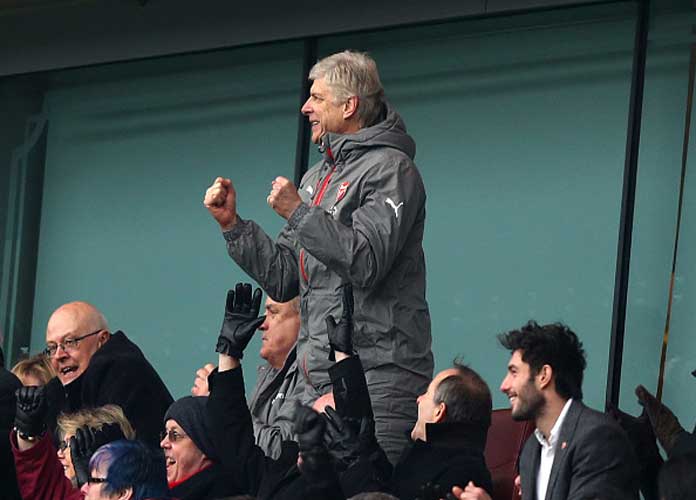 LONDON, ENGLAND - FEBRUARY 11: Arsene Wenger, Manager of Arsenal celebrates his team's first goal in the stand during the Premier League match between Arsenal and Hull City at Emirates Stadium on February 11, 2017 in London, England. (Photo by Clive Rose/Getty Images)

Arsene Wenger has re-stated that he would prefer to remain Arsenal’s manager beyond the end of this season, when his current contract expires, when asked about the possibility of him heading Barcelona following the news that Luis Enrique has stepped down as manager of the Spanish club.

Barcelona are one point ahead of Real Madrid at the top of La Liga, albeit having played one game more. Enrique has stated he needs to rest.

Wenger, meanwhile, has managed Arsenal since 1996. The Gunners are fourth in the Premier League, one point ahead of fifth-place Liverpool, who they visit on Saturday.

The 67-year-old Frenchman has the offer of a new two-year deal on the table, and he wants to assess the mood at Arsenal near the end of the season to decide whether he will stay or leave.

“I have been here for 20 years and I had many times the opportunity to leave, so I don’t think I have to convince you that my preference has always been Arsenal,” Wenger said. “But, of course, I am objective and lucid enough to make the right decision for myself and the club as well. The club is free to make the decision it wants and I will respect that.

“Would I be interested in the Barcelona job? No. My preference has always been the same and it will remain the same. I am not looking for jobs in other clubs or jobs off other people. I am focused on me, getting to the next level and trying to improve and always trying to see what you can do better and reinvent yourself – that’s what I try to do. That’s basically it.”

Arsenal’s last game was the FA Cup victory at Sutton United on Monday last week, and Wenger is concerned about the possibility of his team having lost “the rhythm of the competition” after such a long break.

Wenger added that Aaron Ramsey, Laurent Koscielny and Olivier Giroud will be available for Saturday’s match against Liverpool.

LONDON, ENGLAND – FEBRUARY 11: Arsene Wenger, Manager of Arsenal celebrates his team’s first goal in the stand during the Premier League match between Arsenal and Hull City at Emirates Stadium on February 11, 2017 in London, England. (Photo by Clive Rose/Getty Images)