After Lionel Messi Arrives At PSG, All Eyes On Kylian Mbappe - uSports.org 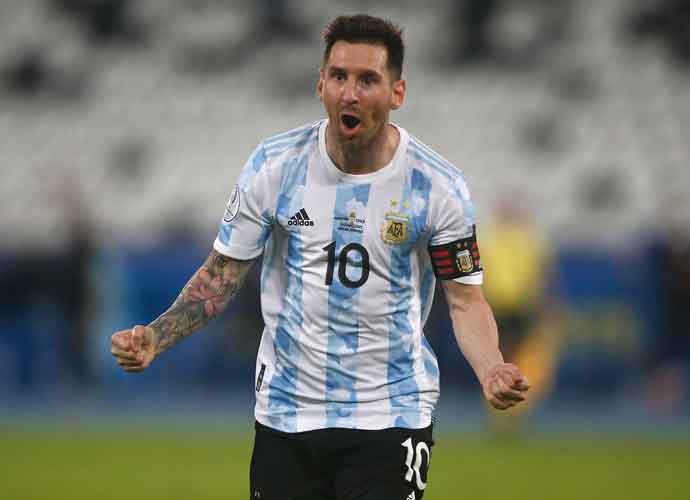 RIO DE JANEIRO, BRAZIL - JUNE 14: Lionel Messi of Argentina celebrates after scoring the first goal of his team during a Group A match between Argentina and Chile at Estadio Olímpico Nilton Santos as part of Copa America Brazil 2021 on June 14, 2021 in Rio de Janeiro, Brazil. (Photo by Wagner Meier/Getty Images)

On Tuesday, Lionel Messi flew to Paris on a private jet to finalize his move to Paris-St. Germaine (PSG). The Argentinian has signed a two-year contract with PSG that includes an option for a third year. But many now are wondering if the club will be able to keep its star player Kylian Mbappe, who had been long rumored to be leaving for another team.

Hundreds of fans gathered to greet Messi at the Bourget airport in France and at PSG’s Parc des Princes stadium. Upon Messi’s arrival, he wore a shirt that said: “This is Paris.”

At the airport, Messi’s father, Jorge, was asked if his son intended to sign with PSG and Jorge provided confirmation. Jorge was then asked who was at fault for Messi leaving Barcelona, to which he replied, “Find out at the club.”

It is reported that Messi will earn more than PSG’s Brazilian star, Neymar. Neymar and Messi were formerly teammates at Barcelona.

Messi’s contract with Barcelona expired on June 30 and another deal was unable to be agreed upon due to financial restrictions of the league. In an emotional press conference, Messi explained his desire to stay and his willingness to take a pay cut of up to 50%, but even this was not sufficient as the club had not properly managed its finances.

At the farewell press conference, Messi had spoken about his interest in other clubs, “[PSG] is one possibility. There’s nothing closed at the moment, but we’re talking about a lot of things. After Barca’s statement, a lot of clubs showed an interest. There’s nothing final but, of course, there are talks.”

When asked about the possibility of going to a club that rivals Barcelona Messi said, “There is no doubt that I will go to a team that will compete with Barca. I didn’t want to leave, but I have to. And I want to keep winning. That’s my mentality. I want to win.”