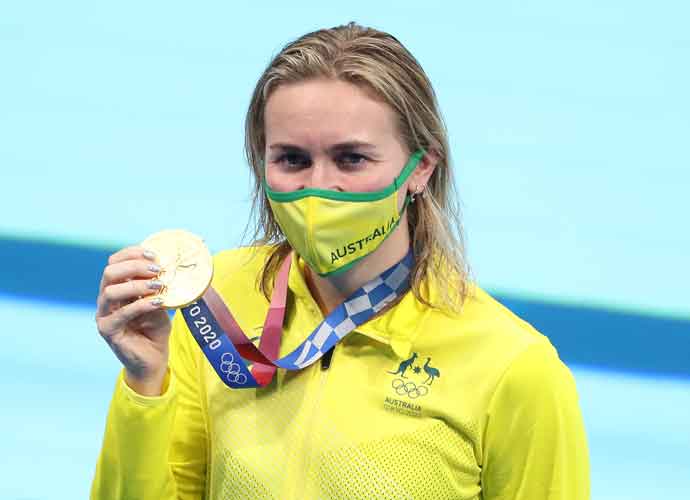 TOKYO, JAPAN - JULY 28: Gold Medalist Ariarne Titmus of Australia during the medals ceremony of the 200m freestyle final on day five of the swimming competition of the Tokyo 2020 Olympic Games at Tokyo Aquatics Centre on July 28, 2021 in Tokyo, Japan. (Photo by Jean Catuffe/Getty Images)

Australian swimmer Ariarne Titmus won gold in the women’s 200-meter freestyle, and she set a new Olympic record with a 1:53.50 time.

At first, it seemed like Titmus wouldn’t earn a medal at all as she was trailing the top three for the first 100 meters. However, Titmus is known for her lightning finishes, and the Australian swimmer dominated the final 50 meters to pull off the upset. Hong Kong’s Siobhan Bernadette Haughey held the lead until the final 20 meters. Haughey took silver while Canadian Penny Oleksiak earned bronze.

“I’m bloody exhausted,” Titmus said. “That was a tough one, I knew Siobhan really wanted this, I could tell by the way that she swam yesterday. So I knew it would be tough to beat her. Honestly, it’s not the time that I thought I could do this morning, but it’s the Olympics, and there’s a lot of other things going on, so it’s just about winning here. I’m very happy.”

Her victory gave the Australian women their third individual swimming gold. It was Titmus’ second gold medal at the Tokyo Olympics. More importantly, it was also another victory for her over rival Katie Ledecky. Ledecky was unable to keep up and finished fifth in the event. It was the first time in Ledecky’s career that she didn’t medal.

Before this event, Titmus defeated Ledecky in the 400-meter freestyle to end Ledecky’s streak.

Connor Fields Out From ICU After BMX Incident