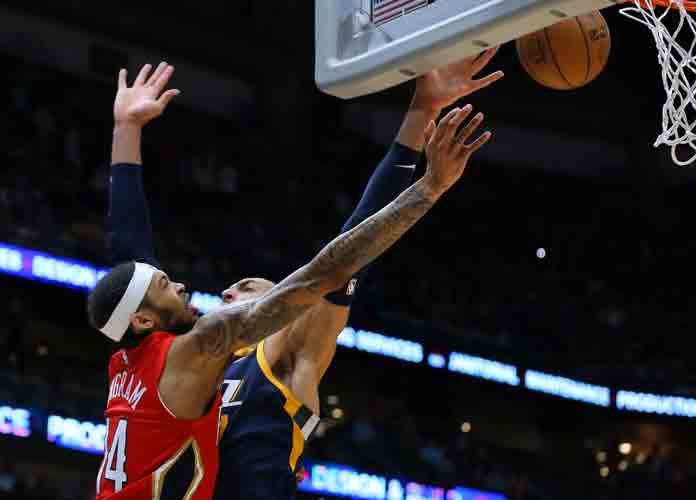 NEW ORLEANS, LOUISIANA - JANUARY 06: Brandon Ingram #14 of the New Orleans Pelicans attempts a game-tying shot as Rudy Gobert #27 of the Utah Jazz defends during the second half at the Smoothie King Center on January 06, 2020 in New Orleans, Louisiana.

Alvin Gentry was not pleased at all on Monday night after a no-call from the referees as time expired led to his New Orleans Pelicans sustaining a 128-126 loss to the Utah Jazz in regulation.

In the final seconds of the game, New Orleans forward Brandon Ingram snagged a rebound from an attempted 3-pointer from Bojan Bogdanovic and three Pelicans immediately called for a timeout: Gentry and guards Lonzo Ball and JJ Reddick. The officials did not grant a timeout and Ingram raced down the court to face Jazz center Rudy Gobert.

Gobert — the two-time reigning Defensive Player of the Year — jumped up and his left arm touched Ingram’s right arm. A foul call would have forced overtime, but instead, the referees signaled that the contest was over after they reviewed the clock due to a potential malfunction. The officials — who reportedly claimed they weren’t allowed to retroactively call a foul per NBA rules — were heavily booed by Pelicans fans at Smoothie King Center, and Gentry expressed in no uncertain terms after the game how upset he was with the no-call.

Brandon Ingram getting mauled by Rudy Gobert at the end with a no foul call. Needless to say the city of New Orleans is done with refs pic.twitter.com/s2avPxEqUc

“All we did was exactly what we were supposed to do — took the ball, drove it hard at the basket — and then they determined it wasn’t a foul,” Gentry said, per ESPN. “End of game.”

Ingram told reporters after the game that he didn’t believe Gobert’s contact made any difference on the final outcome.

“I don’t really think it matters what I saw,” Ingram said. “The referee seen something different.”

New Orleans faced a similar situation last month in a 108-101 overtime loss against the Brooklyn Nets. The Pelicans might have won that game in regulation after Brooklyn committed a shot-clock violation with less than 3 seconds left that the officials didn’t penalize.

The Pelicans (12-25), who are second-to-last in the Western Conference, next host the Chicago Bulls on Wednesday.