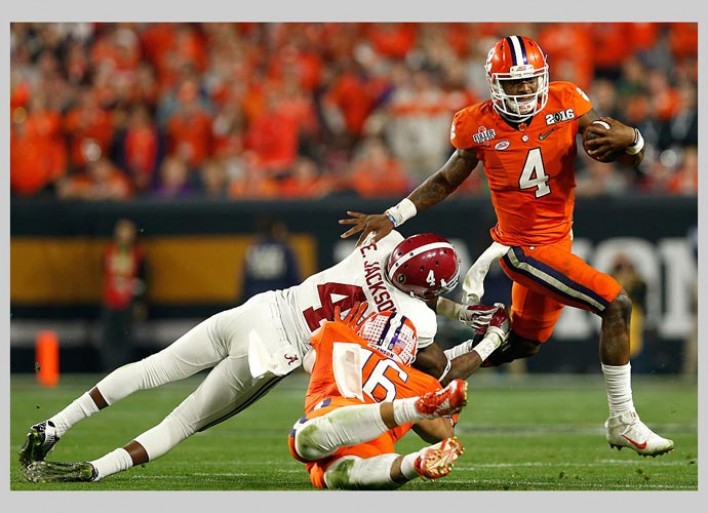 Caption:GLENDALE, AZ - JANUARY 11: Deshaun Watson #4 of the Clemson Tigers runs the ball against the Alabama Crimson Tide during the 2016 College Football Playoff National Championship Game at University of Phoenix Stadium on January 11, 2016 in Glendale, Arizona. (Photo by Christian Petersen/Getty Images)

In what was undoubtedly a competitive matchup, the University of Alabama Crimson Tide (No. 2) was able to defeat the number-one-ranked Clemson Tigers 45-40 at University of Phoenix Stadium in Glendale, Ariz., on Monday night to secure their fourth national title in the last seven years.

Clemson displayed such a powerful defense that Alabama struggled to protect its quarterback, Jakob Coker, who was sacked five times in total.

After trailing 24-21, the Crimson Tide rallied to score 24 points in the fourth quarter. Alabama tied the game at 24 with 10:34 remaining thanks to a 33-yard field goal by Adam Griffith. Cornerback Marlon Humphrey also recovered an onside kick shortly afterwards with no Clemson Tigers anywhere near him.

“I think that changed the momentum of the game, and our guys finished it,” stated Alabama head coach Nick Saban. Coker then targeted tight end O.J. Howard two plays later for his second long touchdown catch of the half. Alabama running back Kenyan Drake returned a kickoff 95 yards on the Crimson Tide’s next drive to score a touchdown and extend their lead to 38-27 with 7:31 remaining.

Clemson QB Deshaun Watson then threw a 15-yard touchdown pass to Artavis Scott with 4:40 left to bring the score to 38-33. Alabama then scored its final TD after Howard took another swing pass and ran 63 yards down the sideline with just 3:45 remaining, which helped set up Heisman Trophy winner Derrick Henry’s 1-yard touchdown run with 1:07 left.

Howard finished with five catches for 208 yards, the first 100-yard receiving game of his career.

Clemson’s Watson threw for 405 yards with four touchdowns and ran for 73 more yards. “I love my teammates, love my brothers, and you’ll see us in Tampa next year,” Watson confidently said despite the loss. That’s where the 2017 national title game will be held.

GLENDALE, AZ – JANUARY 11: Deshaun Watson #4 of the Clemson Tigers runs the ball against the Alabama Crimson Tide during the 2016 College Football Playoff National Championship Game at University of Phoenix Stadium on January 11, 2016 in Glendale, Arizona. (Photo by Christian Petersen/Getty Images)