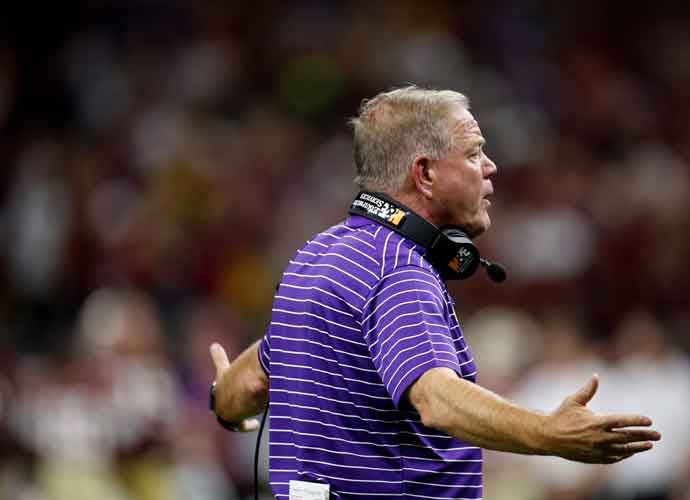 It was all so avoidable. From the opening drive against Florida State University Sunday, it was clear that the start of the Brian Kelly era at LSU would be turbulent. But it could have been a loss and a wakeup call. It didn’t have to be a calamity with the power to completely derail the program for years to come.

At the end of a game in which LSU played atrociously, Florida State found a way to match them, fumbling at the goal line with a 24-17 lead and 1:20 remaining in the fourth quarter. After a completely inept day, Tigers quarterback Jayden Daniels somehow managed to put together a 99-yard drive and found receiver Jaray Jenkins in the end zone on the final play of regulation.

It was the sort of heroic moment that has the power to completely change one’s perception of a game. Kelly and his players seemed completely redeemed as the special teams unit ran out to tie it up. Sure, the Tigers played terribly, but the team capitalized on the Seminoles’ mistakes. LSU finished strong and was probably going to triumph in overtime with obvious momentum. Successful seasons have started worse, and the team was going to have several weeks before it had to face another serious rival.

The extra point was blocked.

Elsewhere in the SEC, #1 Alabama and #3 Georgia defeated their Week 1 opponents by a combined score of 104-3. Texas A&M dominated Sam Houston while Tennessee, Auburn, #20 Kentucky, Mississippi State, #21 Ole Miss and South Carolina all picked up routine wins against weaker opponents. #19 Arkansas won a competitive game against #23 Cincinatti while Florida scored a shocking upset over #7 Utah. Even lowly Vanderbilt has managed to win both of its games and currently sits atop the conference standings.

LSU was the only SEC team to lose in Week 1, and the Tigers didn’t just lose. They played badly enough to get clobbered on their own turf, received a miraculous comeback opportunity they didn’t deserve, and then they missed the extra point. The reaction since within the LSU community has been visceral.

Kelly blamed himself for the loss after the game, saying that he and his staff had “some learning to do.” The fanbase has not been quick to forgive him, however, as the team’s supporters have launched into a collective tirade on social media. Some have even called for the head coach’s removal after a single game. While the fans melt down online, some within the program are following suit.

After making just two catches for 20 yards Sunday night, All-American wide receiver Kayshon Boutte deleted all of his Instagram posts and unfollowed the LSU football account. Boutte was reportedly considering a transfer in the offseason but decided to stay. Kelly told reporters Tuesday that he had a productive conversation with his receiver the day after the game.

“He’s the least guy I’m concerned about on our offense,” Kelly said. “He has handled it in a manner that he’ll learn from.”

If the guy who just wiped his Instagram is the least of his concerns, then Kelly may be in for a wild ride in Baton Rouge. Even reporters are snapping at the head coach; after appearing late to a press conference Monday and receiving mocking admonishment from Kelly, The Advocate writer Leah Vann replied, “Maybe if you won, I’d be on time.”

Their response was savage:

“Maybe if you win I’ll be on time”

As players threaten to quit, fans remain hysterical and the media teases him to his face, Kelly has ensured that his transition period at LSU will not be a smooth one. For the new leader of the historic Southern program, where losses matter and pride runs wild, it will be impossible to feasibly manage operations day to day if the embarrassments persist on weekends. The mutiny’s already begun with the shore still in sight.