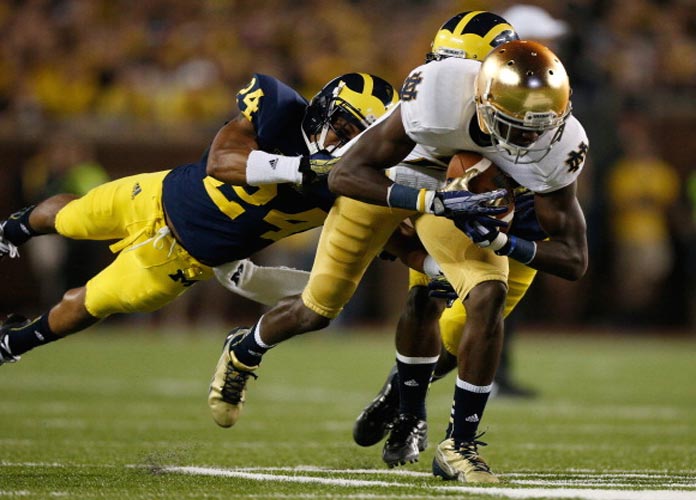 ANN ARBOR, MI - SEPTEMBER 07: Chris Brown #2 of the Notre Dame Fighting Irish is tackled by Delonte Hollowell #24 of the Michigan Wolverines after a third quarter catch at Michigan Stadium on September 7, 2013 in Ann Arbor, Michigan. Michigan won the game 41-30.

Exciting news for Notre Dame fans as the team has now clinched a spot in the Atlanta Coast Championship thanks to the league rescheduling games. The Fighting Irish are currently undefeated with eight wins and zero losses.

Notre Dame joined the ACC this season because of the pandemic, it forced major college football conferences to alter their schedules.

The ACC announced that the December 12 game between Notre Dame and Wake Forest will not be played. The game was originally postponed to December in late September. Instead, the Fighting Irish will face the visiting Syracuse in their last game of the season on Saturday. Notre Dame currently holds tiebreakers over Clemson and Miami in the event that they lose Saturday. Wake Forest will be facing Louisville on December 12 instead.

It was also announced that the postponed game between the Clemson Tigers and Florida State University will not be played. So, Clemson could still clinch a spot in the championship game if they win over Virginia Tech on Saturday. Florida State, on the other hand, will be hosting Duke on December 12 and facing Wake Forest on December 19.