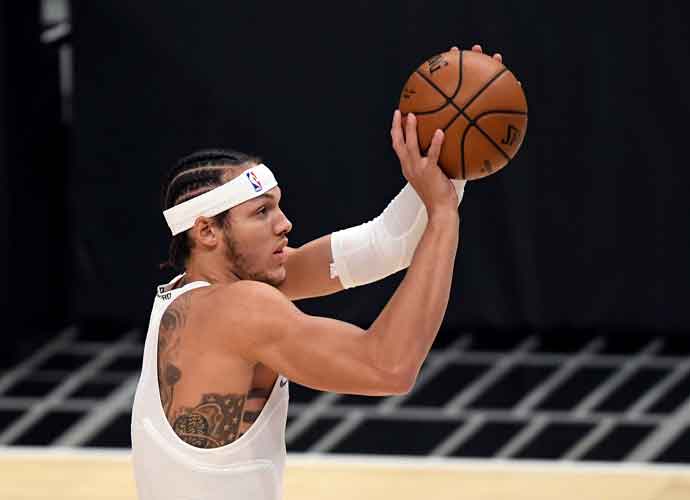 LOS ANGELES, CA - MAY 01: Aaron Gordon #50 of the Denver Nuggets warms up before the start of a basketball game against the Los Angeles Clippers at Staples Center on May 1, 2021 in Los Angeles, California. NOTE TO USER: User expressly acknowledges and agrees that, by downloading and or using this photograph, User is consenting to the terms and conditions of the Getty Images License Agreement. (Photo by Kevork Djansezian/Getty Images)

The Denver Nuggets retained a key member of their core on Wednesday, by re-signing forward Aaron Gordon to a four-year, $92 million contract extension, his agent, Calvin Andrews confirmed.

The deal includes a player option for the fourth year in 2025-26. It features $88 million in base salary and $4 million in incentives. Gordon, the 11th player this offseason to sign a veteran extension, was dealt to Denver in a March trade that sent veteran shooting guard Gary Harris, rookie R.J. Hampton and Denver’s protected 2025 first-round pick to the Magic.

Gordon, 26, averaged 12.4 points, 5.7 rebounds and 3.2 assists in 25 games with Denver. In the postseason, he raised his production to 11.1 points and 5.4 rebounds as the Nuggets made it to the second round before being swept by the Phoenix Suns. This will be Gordon’s eighth season in the NBA after being picked No. 4 overall by the Magic in the 2014 NBA draft. Denver locked up MVP Nikola Jokic to a five-year deal in 2018 and point guard Jamal Murray in 2019. The next big deal could be for sharpshooter Michael Porter Jr., a long-range threat who averaged 19 points last season. The high-flying forward might be best remembered for his performances during NBA slam dunk contests. In 2020, he finished as the runner-up in a showdown for the ages with Derrick Jones Jr.