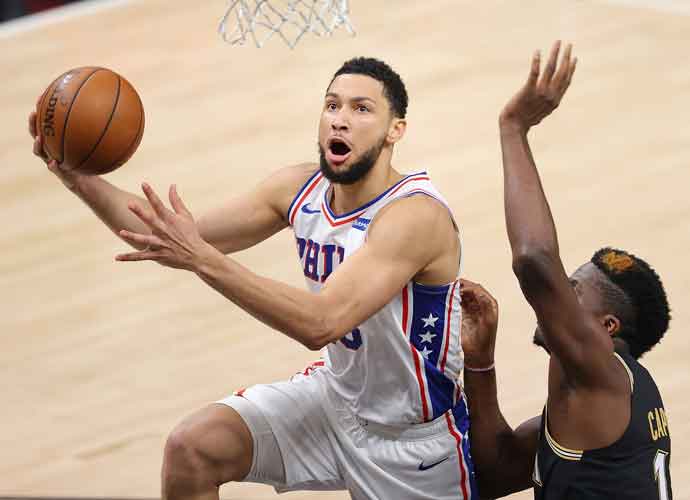 ATLANTA, GEORGIA - JUNE 14: Ben Simmons #25 of the Philadelphia 76ers drives against Clint Capela #15 of the Atlanta Hawks during the first half of game 4 of the Eastern Conference Semifinals at State Farm Arena on June 14, 2021 in Atlanta, Georgia. NOTE TO USER: User expressly acknowledges and agrees that, by downloading and or using this photograph, User is consenting to the terms and conditions of the Getty Images License Agreement. (Photo by Kevin C. Cox/Getty Images)

Ben Simmons notified the Australian basketball team that he would not be competing at the Tokyo Olympics. Australian coach Brian Goorjian expressed that the Australian team and him “understand and support his decision.”

“The best thing for everybody right now is for him to go on and develop that skill package and improve in a couple of areas for his next season in the NBA, but the Boomers are always here for him. We wanted him to know that in his time of need, the culture and the guys here are behind him and support him,” Goorjian said.

Brian Windhorst of ESPN was informed of Simmons’ decision by several sources. Simmons’ decision was made to allow himself to focus on developing his skills. The Australian team is a medal contender for the upcoming Olympics and will begin training in Los Angeles, with two exhibition games against the United States fast approaching.

The 24-year-old struggled from the free-throw line this postseason, shooting 34.2%, a massive drop off from his regular-season 60%. Simmons appeared to be hesitant on the court, as he never took a shot in the fourth quarter of Game 4 versus the Hawks. The 76ers would eventually be eliminated in seven games, with Simmons totaling an underwhelming 19 points in the final three games of the series.

76ers coach Doc Rivers asserted that they have a plan to address Simmons’ shooting struggles that will include “the right work” and “the right way.”

Last week, sources reported that the management of the 76ers met with Simmons’ agent, Klutch Sports CEO Rich Paul, to evaluate the next steps in Simmons’ career.