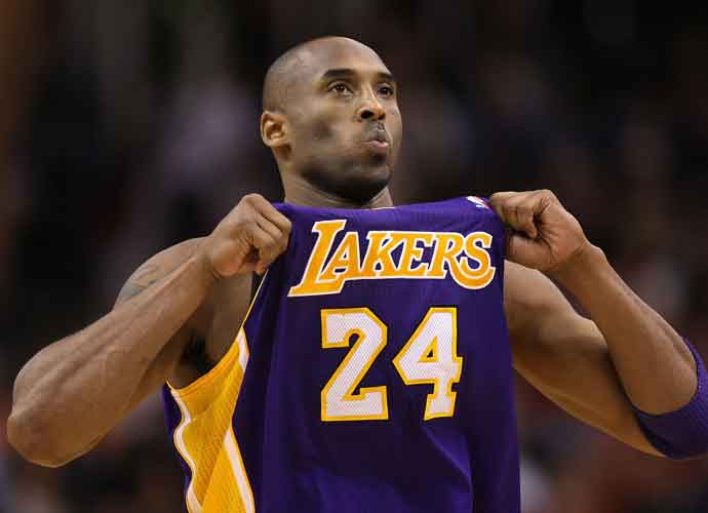 PHOENIX, AZ - FEBRUARY 19: Kobe Bryant #24 of the Los Angeles Lakers adjusts his jersey during the NBA game against the Phoenix Suns at US Airways Center on February 19, 2012 in Phoenix, Arizona. The Suns defeated the Lakers 102-90.

In Philadelphia, where Bryant was born, the 76ers honored the nine victims with a tribute video that was shown on the scoreboard followed that up with a moment of silence. Along the sidelines No. 33 stickers surrounded the court referring to the number Bryant wore when he attended  the nearby Lower Merion High School.

Before the game, players wore warm up jerseys that had an “8” or “24” on the back to honor the Black Mamba’s two numbers worn during his 20-year NBA career. Sixers’ center Joel Embiid wore a No. 24 jersey and ironically scored 24 points in his first game in three weeks. In a postgame interview, he said he gave up volleyball as a teen to pursue basketball because of Bryant’s influence.

Sixers’ point guard Ben Simmons took the court with sneakers that read “MAMBA FOREVER” and “R.I.P. GIGI” written in black marker while Tobias Harris donned sneakers that read “Rest in Peace Kobe” on his right shoe and “Rest in Peace GiGi” on his left. “I was a Lakers fan,” Harris told ESPN. “Modeling his work ethic inspired my game. When I got to the league, I played against him — we had a couple of conversations in games. That, for me, was like a dream come true.”

On Monday morning, Lower Merion High School began the day with a 33-second moment of silence and current students, past alumni and athletes have came to the school to pay respect the last couple of days placing teddy bears, candles and basketballs at a designated memorial.

“Honestly, I didn’t realize how much he had impacted my life until I found out the news,” local resident DaVonn Grosvenor said Monday. “It’s tough when you lose an icon, when you lose a legend. He had so much more to offer. So I just had to come by and pay my respects. The only way I knew how was on the grounds he walked on once upon a time.”

Bryant famously scored 2,883 points at Lower Merion, which is a school record and the court has since been named Bryant Gymnasium.

On Tuesday, Lakers’ fans continued to show support by placing flowers, candles and other mementos outside of the Staples Center and later greeted Shaquille O’Neal who lead the crowd with “Kobe” chants as he exited the arena after a special edition of “Inside the NBA.”

Bryant’s favorite soccer team A.C. Milan paid tribute during Tuesday’s Italian Cup game at San Siro Stadium. Players wore black armbands and the phrases “Legends Never Die” and “SempreKobe” a play on the “SempreMilan” (or “AlwaysMilan”) hashtag used by the club, were displayed on the advertising screens around the San Siro while images of Bryant were shown on the biggest screen.

Magic Johnson voiced his support on Jimmy Kimmel Live! telling the audience that Bryant “would have wanted us all to carry on and be great at our lives. We should do something positive.”