MINNEAPOLIS, MN - MAY 15: Byron Buxton #25 of the Minnesota Twins celebrates his solo home run as he crosses home plate against the Cleveland Guardians in the fifth inning of the game at Target Field on May 15, 2022 in Minneapolis, Minnesota. Buxton hit the 1,000th home run by a Twins player at Target Field. The Twins defeated the Guardians 3-1. (Photo by David Berding/Getty Images)

The Chicago White Sox were the sexy preseason pick to win the AL Central, but the Twins are no slouches themselves.

They did finish 73-89 last season, but they have great potential in 2022. Byron Buxton, Carlos Correa, Jorge Polanco and Gary Sanchez will hold down the lineup, while Miguel Sano and Luis Arraez will both look to add some offense.

> GET DEALS ON MINNESOTA TWINS TICKETS!

Sonny Gray will anchor the rotation, while Joe Ryan and Chris Archer will look to nail down some Ws.

The Twins lead the division with an 18-11 record and +25 run differential. They’ll close out the first half of the regular season with four at home against those pesky White Sox, and open the second half with two in Detroit.

Minnesota will close out its 2022 campaign with three in Detroit and three in Chicago against the ChiSox. 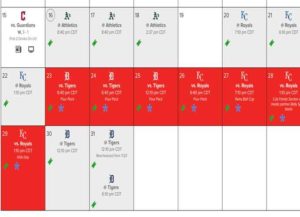