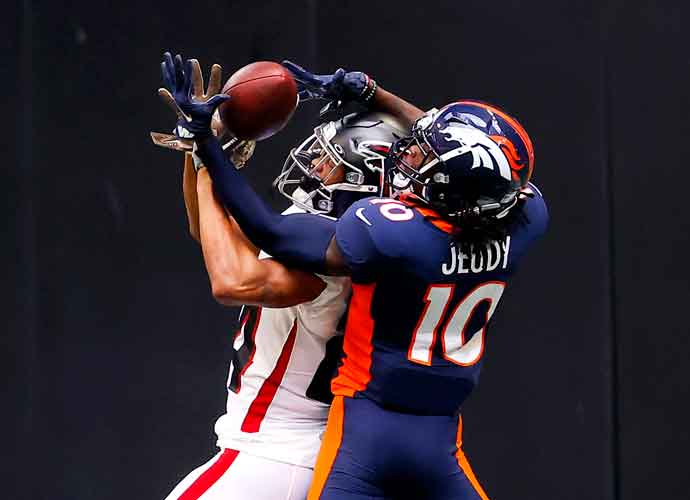 ATLANTA, GEORGIA - NOVEMBER 08: A.J. Terrell #24 of the Atlanta Falcons breaks up a pass intended for Jerry Jeudy #10 of the Denver Broncos during the first half at Mercedes-Benz Stadium on November 08, 2020 in Atlanta, Georgia. (Photo: Getty)

To make matters a bit more complicated, there has been rumors of a potential blockbuster trade for Aaron Rodgers. Rodgers requested a trade from the Packers after a fallout with the organization. Denver was one of the favorite teams to land Rodgers because of their salary cap space and position. If the Packers are willing to trade their disgruntled star, Denver has the best chance to land the MVP quarterback. With Rodgers on the team to lead the young Denver team, there is a good possibility that they can make the playoffs either this coming season or in 2022.

CLICK HERE TO GET THE BEST DENVER BRONCOS TICKET DEALS!

AFC West: Denver will not fare well in the division this season. The team is currently still rebuilding so do not expect them to win the division. The Broncos have a chance to finish second in the division, but it will be a difficult task. They were the worst team in the division last season. Last season, the Broncos lost all their matchups with the Raiders, Chiefs and Chargers. That cannot happen again if they want to compete in the top-heavy AFC West.

Matchups: The Broncos start the season with three winnable games. They will face three fellow rebuilding teams before facing three playoff teams in their next five games. From weeks 8-12, the team gets a break from difficult teams with beatable teams. The ending stretch for the Broncos provides a challenge, with their last game being against none other than the Kansas City Chiefs.

Overall: The Broncos are still going through a rebuild and don’t even know who will start at the quarterback position. If Denver is able to acquire Rodgers, they would have a great chance at postseason success. However, as of now, things aren’t looking great for the Broncos. This season will be an uphill battle.

Prediction: Denver will finish 6-11, last in the division.

CLICK HERE TO GET THE BEST DENVER BRONCOS TICKET DEALS!