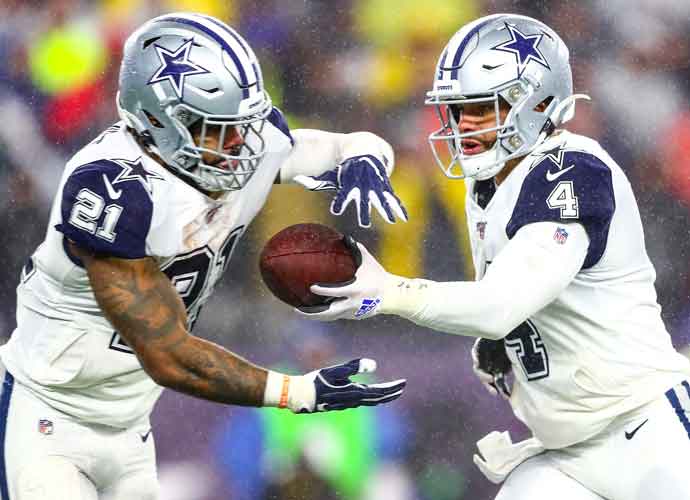 FOXBOROUGH, MA - NOVEMBER 24: Dak Prescott #4 hands the ball off to x#21 of the Dallas Cowboys during a game against the New England Patriots at Gillette Stadium on November 24, 2019 in Foxborough, Massachusetts. (Photo: Getty)

The 2020 season did not go as planned for the Dallas Cowboys. Starting quarterback Dak Prescott suffered a season-ending ankle injury in Week 5 that derailed the team’s playoff hopes. Dallas was somehow able to rally without their Pro Bowl quarterback to almost win the division. However, their dreams were crushed in Week 17 when they lost to the Giants. Washington’s Week 17 victory clinched the Football Team the NFC East title. Last year was the second year in a row that the Cowboys missed the playoffs.

Now that Prescott is getting healthy and will be ready for the upcoming season, Dallas is looking to bounce back and win the NFC East. The two-time Pro Bowler has already proved that he can lead Dallas on offense. In 2019, the Cowboys had the best offense in the league, leading the league in total yards and yards per game. They were second in the league in passing yards. The Cowboys will be looking to replicate that same offense with a fully healthy Prescott.

The Cowboys also made some notable offseason changes to the coaching staff. They fired defensive coordinator Mike Nolan. Nolan lasted only one season in Dallas, and under him, the Cowboys became one of the worst defensive teams in the league. Dan Quinn was brought in to replace Nolan. Quinn is known for being one of the engineers of the Seattle Seahawks‘ famed “Legion of Boom” defense. Quinn was the defensive coordinator during that era in Seattle and helped them become one of the best defensive teams in league history. The hiring of Quinn is a quintessential move made by the organization that will help improve the Cowboys’ defense.

CLICK HERE TO GET THE BEST DALLAS COWBOYS TICKET DEALS!

Matchups: The Cowboys begin their season facing the defending Super Bowl champions in Tampa. They then travel to Los Angeles to face off with explosive quarterback Justin Herbert. Their schedule then becomes more favorable, as they four very beatable teams before their Week 7 bye. The toughest games on their schedule are against the Bucs, Saints, Chiefs and Washington.

Overall: The Cowboys will begin their season with the return of their two-time Pro Bowl quarterback leading the offense. A healthy Prescott elevates the team’s offense exponentially. Plus, the addition of Quinn will strengthen their defense. Dallas is poised to make a run at the postseason.

Prediction: The Cowboys will finish with a 10-7 record.

CLICK HERE TO GET THE BEST DALLAS COWBOYS TICKET DEALS!