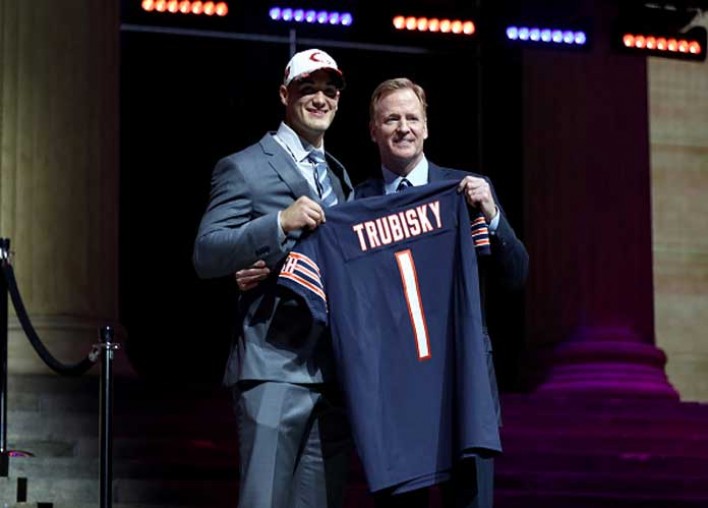 PHILADELPHIA, PA - APRIL 27: (L-R) Mitchell Trubisky of North Carolina poses with Commissioner of the National Football League Roger Goodell after being picked #2 overall by the Chicago Bears (from 49ers) during the first round of the 2017 NFL Draft at the Philadelphia Museum of Art on April 27, 2017 in Philadelphia, Pennsylvania.

On Monday, NFL commissioner Roger Goodell announced that the league will hold a fully virtual draft with team personnel separately located in their homes.

While the coronavirus has already affected college basketball and the NBA in major ways, the NFL is trying to stand strong. The league will abide by the rules, which indicate large gatherings of people are prohibited, but it will not let the pandemic delay or cancel the 2020 NFL Draft. However, with the decision to go virtual, there has been concern by many teams that the draft could be remotely hacked. Most NFL teams will operate using video-conferencing services such as Zoom. Baltimore Ravens head coach John Harbaugh knows that Zoom has had calls targeted by hackers, and he’s nervous about that happening during one of the most important events of the NFL season.

“Yeah, big concern,” Harbaugh said during a  Zoom call on Monday . “Every time I read something in, like, the Wall Street Journal or the New York Times that talks about how messed up Zoom is, or some of these other deals … I immediately text it to our IT people, and [director of football administration] Nick Matteo’s one of those guys, and they assure me that we are doing everything humanly possible.”

Zoom has said that they are taking security very seriously. It recently announced new security measures, including the introduction of passwords and waiting rooms for users on its free tier. Still, Harbaugh expressed concern about how the league will be able to avoid potential wrongdoers.

“We’ll see what happens,” Harbaugh said. “I really wouldn’t want the opposing coaches to have our playbook or our draft meetings. That would be preferable if we can stay away from that.”