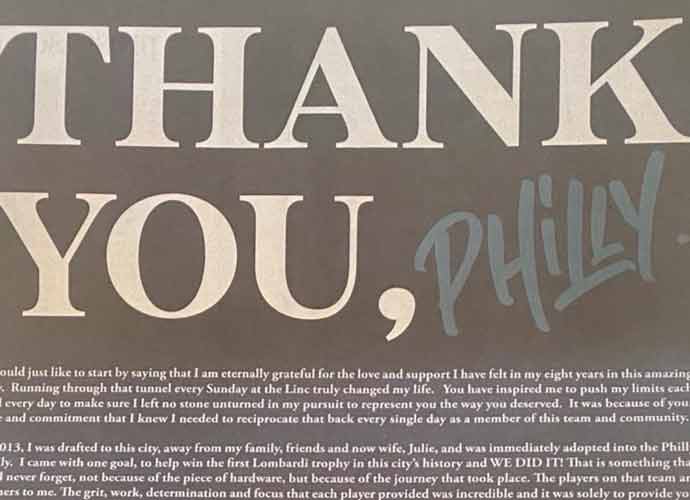 Former Philadelphia Eagles tight end Zach Ertz has published a full page in the Philadelphia Inquirer thanking the city and Eagles fans for inspiring him to be great during his eight-year run with the team. On Friday, the Eagles announced that Ertz would be starting a new chapter of his career with the Arizona Cardinals.

Zach Ertz takes a full page out in the back section of today’s Inquirer Sports section to thank #Eagles fans and Philadelphia after his trade to the Cardinals: pic.twitter.com/9EfErZVL0p

The Eagles acquired Ertz in the second round of the 2013 NFL Draft. After many successful years with the franchise and three Pro Bowls under his belt, it is safe to say he has had a tremendous influence on the team during his time in Philadelphia. During his eight seasons, the 30-year-old has had 579 receptions and 38 touchdown catches while also setting an NFL record for most catches in a single season by a tight end – in 2018 he recorded 116 catches.

Although Ertz was beloved by the Eagles community, over the summer there was speculation that he would be traded before the start of the season. It did not happen as anticipated, but it did in fact happen. After six games of the season, the trade became a reality when the Cardinals traded a 2022 fifth-round draft pick and Tay Gowan for Ertz.

During preseason, Ertz told reporters that he was “excited to be here” despite trade speculation. “This is the most fun I’ve had coming to work in a long time these past four weeks,” he said. “It’s been freeing to kind of just focus on football.”

Ertz leaves an Eagles team that has struggled to get moving this season – a team that has only recorded two wins in the first six games (2-4). Conversely, the Cardinals are off to an incredible start (6-0) and will look to continue this push with the addition of Ertz.

“Ultimately I’m here to just kind of put in the past. I’m not here to make it about me, ultimately. I’m excited be here,” he told reporters. “This is the most fun I’ve had coming to work in a long time these past four weeks…. It’s been freeing to kind of just focus on football.”

With the Eagles off to a 2-4 start, the front office elected to move on from Ertz. The Cardinals had a need at tight end after Maxx Williams suffered a season-ending knee injury in Week 5 against the San Francisco 49ers.