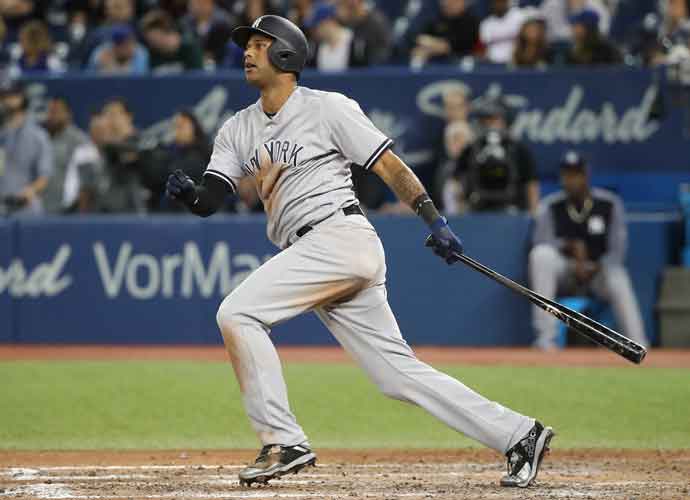 Aaron Hicks #31 of the New York Yankees hits a two-run double in the ninth inning during MLB game action against the Toronto Blue Jays at Rogers Centre on June 1, 2017 in Toronto, Canada.

Could it be that the New York Yankees have tapped into the potential of not one, but two, home run hitting monsters?

On top of Aaron Judge‘s ridiculously hot start to the 2017 season, in which he has hit a league-leading 17 home runs, last year’s breakout star Gary Sanchez may be returning to 2016 form. Sanchez hit two home runs for three RBIs in last night’s Yankee win over the Toronto Blue Jays, 12-2.

Sanchez, who hit 20 homers in the final two months of the 2016 season, missed some time early on this year with a strained bicep but his been decent in his return. So far the 24-year-old has hit six home runs and 15 RBIs to the tune of a .270 average. His performance last night reminded many of the young star they saw less than six months ago.

“He can do a lot of damage,” manager Joe Girardi told reporters after the game.

When asked why Sanchez wasn’t hitting as well as he was last season, Girardi joked that last year, Sanchez wasn’t human. But, despite Sanchez’s return to human form, the manager believes that there wasn’t ever anything wrong his catcher’s approach at the plate.

“We thought his swings were better [tonight]. We thought that he just missed a few pitches here and there. We like the work that he had been doing in the cages with our coaches. His approach seemed to be getting better as well. Those are two big home runs.”

Sanchez commented on his season thus far as well. “I feel that I’m still not where I want to be, but I see improvement every day. I feel better and better and better, but I feel I can improve my timing.”

Sanchez wasn’t the only young star knocking in runs on the night. Aaron Hicks, who has replaced the injured Jacoby Ellsbury, had a career best six RBIs on the night, coming on four hits. Judge, who took the night off from sending one into the stands, had one hit, knocking in Brett Gardner – who collected his 1,000 career hit with a single in fourth inning – for the first run of the game. The Yankees would go on to score four in the first inning alone.

Benefiting from the barrage the most was Yankee’s veteran pitcher CC Sabathia, who threw 6 1/3 innings, giving up only one run. He struck out seven and didn’t walk a batter.

The first-place Yankees face the Blue Jays in game two of the series on Friday, June 2 at 7 p.m. EST on YES.