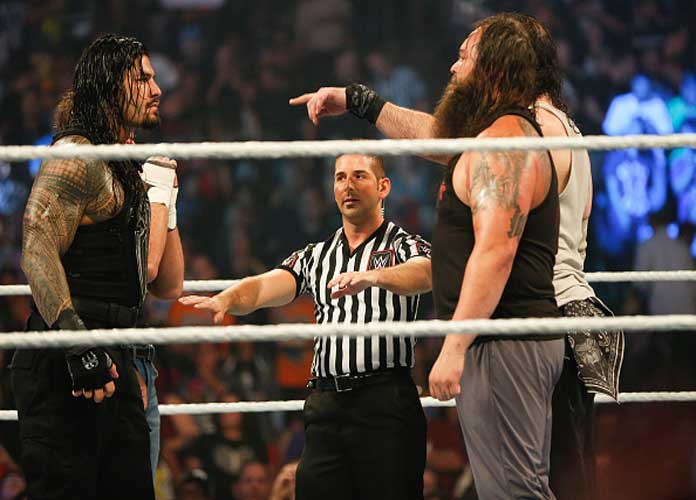 NEW YORK, NY - AUGUST 23: Roman Reigns and Bray Wyatt stare each other down at the WWE SummerSlam 2015 at Barclays Center of Brooklyn on August 23, 2015 in New York City. (Photo by JP Yim/Getty Images)

The WWE will be returning to live events soon.

The sports entertainment company announced the plans for future tours again. “WWE Live Events are back! A 25-city tour, including Raw, SmackDown, and MITB kicks off on July 16,” the company wrote on Twitter.

GET DEALS ON WWE TICKETS HERE!

WWE Live Events are back! A 25-city tour, including #WWERaw, #SmackDown and #MITB kicks off on July 16. https://t.co/52qKC9iRcV pic.twitter.com/4EAriULXqC

The return of live tours comes a month after the WWE hosted its first event with fans at Wrestlemania 37. Wrestlemania 37 is the company’s flagship event and is hosted on two nights. It was hosted at Raymond James Stadium in Tampa Bay, Florida. Capacity was capped, though both nights still sold out, with 25,675 fans each night.

The return of live events will mark the end of WWE’s ThunderDome. The final show in the ThunderDome will be on Monday, July 12. NXT, the WWE’s developmental brand, will continue to run out of its Capitol Wrestling Center, which is produced in the WWE Performance Center.

The ThunderDome was established in August of 2020 after WWE staged shows with no fans due to the coronavirus pandemic. The ThunderDome features large LED screens that virtually bring fans into the arena via live video and featured pyrotechnics, lasers, graphics, and drone cameras.