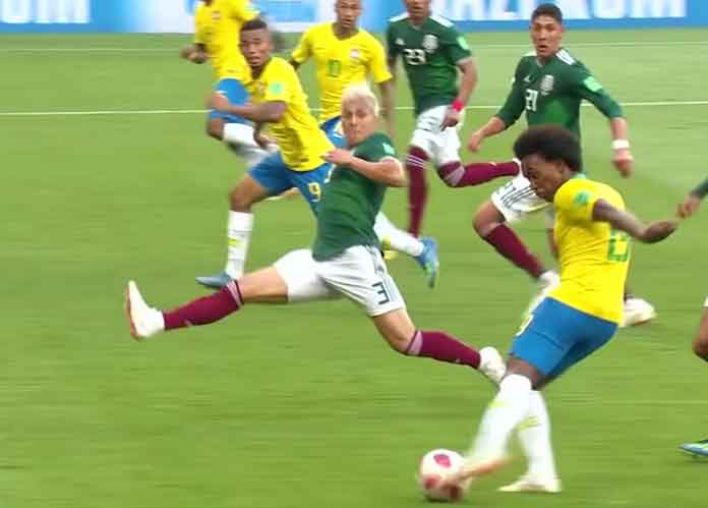 Mexico crashed out of the 2018 FIFA World Cup on Monday after a 2-0 second-round loss to Brazil in Samara, Russia.

Neymar and Roberto Firmino scored for five-time World Cup champions Brazil in the second half to propel the team into the quarter-finals. Mexico has now been knocked out of seven straight World Cups in the round of 16, after four total games played.

Mexico’s coach, Colombian Juan Carlos Osorio,  heavily criticized Neymar without naming him — specifically accusing the superstar of “acting” or faking the severity of his injuries —, as well as the referees for what he perceived to be unfair calls that favored Brazil.

After beating defending World Cup winners Germany 1-0 in their opening game, Mexico had drawn the admiration of many fans. El Tri then defeated South Korea 2-1 in its second game, and despite losing to Sweden 3-0 in their final group-stage contest, advanced to the second round after the asian nation eliminated Germany with their own shocking 2-0 triumph.

Brazil will now face Belgium in the quarterfinals on Friday at 2pm EST. Belgium advanced by eliminating Japan with a 3-2 comeback win after trailing 2-0 early in the second half.

Mexico had some strong scoring chances in the first half, starting in the ninth minute. On a corner kick, Javier “Chicharito” Hernandez crashed into Brazil’s goalie Alisson Becker in an attempt to head in the ball. However, Brazil also threatened with several shots in the first half, and Mexico’s goalie Guillermo Ochoa was there to make multiple key stops, including one from Gabriel Jesus in the 33rd. Ochoa also denied Philippe Coutinho, Paulinho and other Brazilian attackers’ strikes in the second half.

Neymar put Brazil up 1-0 in the 51st minute, after he carried the ball across the top of the box and then back-passed it to Willian, who tapped it near the left side of the goal and Neymar re-connected to shoot from close range into a nearly wide-open goal, as Ochoa had been jockeying to make a save near one post.

Carlos Vela had an opportunity for Mexico in the 61st, but Becker bumped it over the crossbar. In the 71st minute, Neymar was writhing on the ground after a tackle, and it appeared that Mexico’s Miguel Layun stepped on the Brazilian star’s foot while walking over to pick up the ball, and Neymar subsequently seemed to be in even greater pain.

Layun is all of us whenever Neymar drops #BRAMEX pic.twitter.com/XmGRhX8HB5

Firmino doubled Brazil’s lead in the 88th minute with a goal similar to the first. After racing down the left side, he delivered a short cross that Firmino met to tap in from a few yards out after also running to meet the ball. Just moments before that goal, Osorio was seen furiously arguing with officials on the sideline about a previous call.

Belgium beat Japan 3-2 later on Monday thanks to a late goal from Nacer Chadli. Japan had been leading 2-0 after scoring two goals early in the second half. In the 48th minute, Belgium’s Jan Vertonghen, a Tottenham Hotspur defender, failed to intercept a pass that he could have stopped, and Genki Haraguchi raced forward to put the Asians up 1-0. Four minutes later, Japan doubled their lead after Takashi Inui fired a stellar strike from just outside the box. Vertonghen redeemed himself from his mistake to score Belgium’s first goal with a brilliant, powerful header from a difficult left-side angle in the 69th minute. Marouane Fellaini tied it five minutes later, and Chadli netted the game-winner in the 94th, using Romelu Lukaku as a dummy.

The last two round of 16 games will be played on Tuesday. Sweden and Switzerland will face off first, and the winner of that game will play the winner of England vs. Colombia in the quarterfinals.