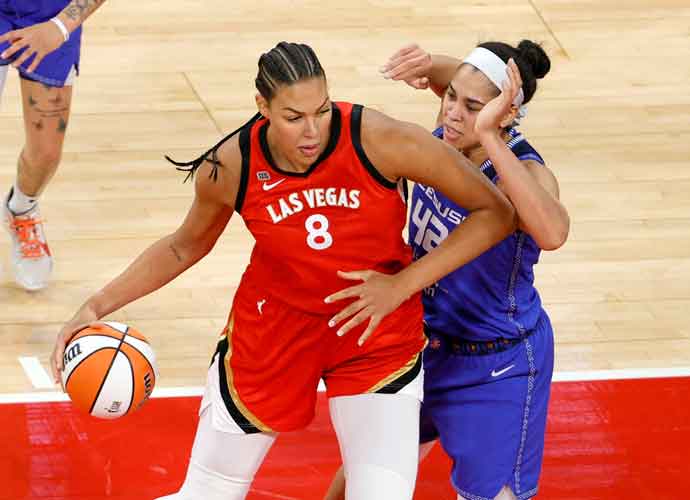 LAS VEGAS, NEVADA - MAY 23: Liz Cambage #8 of the Las Vegas Aces is guarded by Brionna Jones #42 of the Connecticut Sun during their game at Michelob ULTRA Arena on May 23, 2021 in Las Vegas, Nevada. The Sun defeated the Aces 72-65. NOTE TO USER: User expressly acknowledges and agrees that, by downloading and or using this photograph, User is consenting to the terms and conditions of the Getty Images License Agreement. (Photo by Ethan Miller/Getty Images)

During a recent WNBA game, awful, derogatory comments were made towards Aces star Liz Cambage. The head coach of the Connecticut Sun, Curt Miller called her 300 pounds, and for this he has been fined $10,000 and suspended one game. After making these comments, Miller apologized. “During last night’s game, while arguing a call with an official, I made an inappropriate and offensive comment in reference to Liz Cambage’s height and weight,” Miller said. “I regret what I said in the heat of the moment and want to sincerely apologize to Liz and the entire Aces organization. I understand the gravity of my words and have learned from this.”

Cambage didn’t take kindly to the comments nor the apology and in return, posted an Instagram story last Monday claiming that he said something along the lines of “she’s 300 pounds.”

“Something went down in today’s game and I need to speak on it, because if there’s one thing about me is that I will never let a man disrespect me,” Cambage said Sunday night. “So to the coach of Connecticut—I’m sorry, little sir man, I do not know your name. But the next time you try to call out a referee trying to get a call being like, ‘C’mon, she’s 300 pounds,’ I’m going to need you to get it right baby. I’m weighing 235 pounds and I’m very proud of being a big b—-, big body, big Benz, baby. So don’t ever try to disrespect me or another woman in the league. For a coach for another team, to be yelling, like, [that’s] protected abuse,” Cambage said. “Because we can’t do nothing back. It’s just crazy to me.”

Cambage is one of the better centers in the league. She’s a three-time All-Star in five WNBA seasons. She averaged 15.9 points and 8.2 rebounds per game in 2020 as Las Vegas reached the WNBA semifinals.