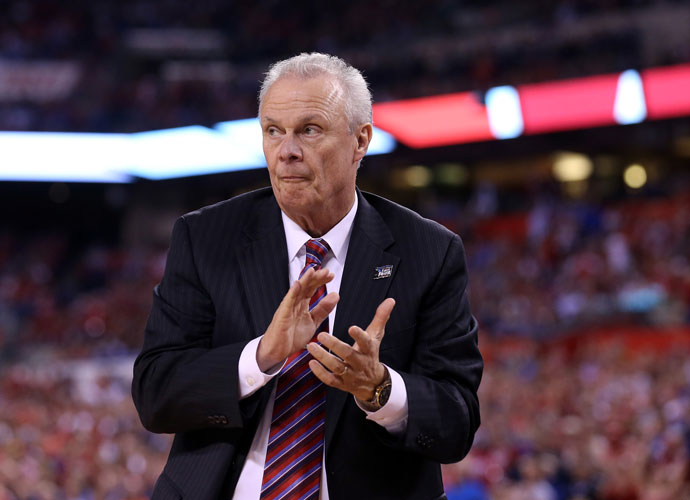 INDIANAPOLIS, IN - APRIL 06: Head coach Bo Ryan of the Wisconsin Badgers reacts in the second half against the Duke Blue Devils during the NCAA Men's Final Four National Championship at Lucas Oil Stadium on April 6, 2015 in Indianapolis, Indiana. (Photo by Streeter Lecka/Getty Images)

Before this season started, Wisconsin Badgers men’s basketball head coach Bo Ryan said this season would be his last. But after an ordinary game against Texas A&M-Corpus Cristi on Tuesday night, he decided the time had come.

“After months of conversation with Barry Alvarez and his administrative staff, as well as my wife, Kelly, I have decided that now is the right time to step down from the head coaching position here at Wisconsin,”the coach said in a statement released after the game.

Ryan is the most successful coach Wisconsin, a school known more for their exploits on the gridiron than the hardwood, have ever had. The Badgers never missed the NCAA Tournament under Ryan’s watch and the coach guided them to two consecutive Final Fours in the last two seasons. Last year, they reached the championship game before losing to Duke.

“It is so emotional right now, and I’m trying to hold this together,” Ryan said after the game. He then left without taking questions; he explained that he had to inform his staff because he didn’t want to distract them with the news before the game.

Badgers forward Nigel Hayes said that he noticed something different about the coach when the pair made eye contact before the game.

“It was like the saddest look I’ve ever seen him have,” Hayes said. “I guess now it makes sense why he looked like that. We’ve got to remember he’s an old guy. He’s been yelling and screaming for a long time. That takes a toll on your health.”

Ryan’s long-time associate head coach Greg Gard will take over the Badgers, at least for the remainder of this season.

Photo: Head coach Bo Ryan of the Wisconsin Badgers reacts in the second half against the Duke Blue Devils during the NCAA Men’s Final Four National Championship at Lucas Oil Stadium on April 6, 2015 in Indianapolis, Indiana. (Photo by Streeter Lecka/Getty Images)

Read more about:
Bo Ryan NCAA Basketball Wisconsin Badgers
Listen to the uInterview Podcast!
Get the most-revealing celebrity conversations with the uInterview podcast!