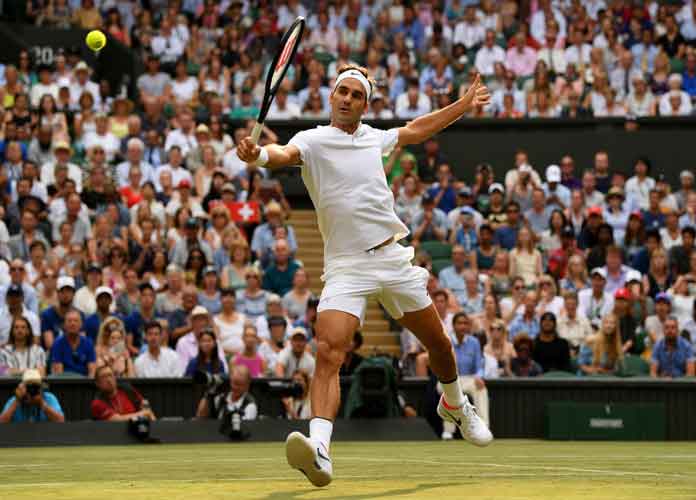 LONDON, ENGLAND - JULY 06: Roger Federer of Switzerland plays a backhand during the Gentlemen's Singles second round match against Dusan Lajovic of Serbia on day four of the Wimbledon Lawn Tennis Championships at the All England Lawn Tennis and Croquet Club on July 6, 2017 in London, England. (Photo by Shaun Botterill/Getty Images)

Roger Federer next faces Mischa Zverev In Round 3 on Saturday

Federer — the No. 3 seed — dropped his first service game on Center Court but then recovered to defeat 27-year-old Lajovic, the World number 79.

With the victory, the 35-year-old Swiss pushed his win streak at the All England Club to 86. Federer is now closer to becoming the first man to capture eight Wimbledon singles titles. He first won the singles tournament in 2003.

“I was feeling nerves for some reason. Not sure why,” said Federer, who will face 27th-ranked German Mischa Zverev in the third round on Saturday morning. “It was definitely more acute than I normally feel it. It was just like all of a sudden I was walking up to the locker room after my warm-up and I was feeling excited and nervous.”

“Just took a while to shake it off.”

The Swiss last won the tournament in London in 2012. In the third set on Thursday, he recorded his ninth ace to seal the victory.

Pliskova, 25, has now been eliminated from the second round of Wimbledon for the fifth straight year.

Rybarikova entered Thursday having won 14 of her 15 matches on grass this summer. The 28-year-old star — the No. 2 Slovakian behind Dominika Cibulkova — beat Pliskova in two hours and 17 minutes after forcing her way back from a set and a break down. She will next face World number 35 Lesia Tsurenko of Ukraine on Saturday morning.

The right-hander’s performance on Thursday is particularly impressive because just four months ago, Rybarikova was ranked 453rd in the world after having been forced off the tour for six months due to surgeries to her right knee and left hand.

After her loss, Pliskova admitted that leading by one set and a break does not necessarily mean one has control of a match, although she strangely added that she felt she was “close to winning.”

I played one bad game overall in second set, and otherwise I don’t think I did something wrong,” said the Czech. Asked about the fact that she could still become the world’s top-ranked female player unless Simona Halep reaches the semi-final or Angelique Kerber advances to the final, she was optimistic.

“For me the tournament is over. I’m not going to pray for someone losing or winning. I’m just going to take off and wait,” Pliskova added. “I have a lot of time to prepare till my next tournament in Toronto. I will make sure I prepare well, but for me now it’s vacation time.”

Kyle Edmund failed to become part on an elite group of four other British stars to reach the third round of the tournament after he lost to 15th-seeded Frenchman Gael Monfils 7-6(7-1), 6-4, 6-4.

On Friday, Halep, Caroline Garcia and Victoria Azarenka all advanced, while 10th-seeded Venus Williams is set to face off against Japanese 19-year-old Naomi Osaka.

LONDON, ENGLAND – JULY 06: Roger Federer of Switzerland plays a backhand during the Gentlemen’s Singles second round match against Dusan Lajovic of Serbia on day four of the Wimbledon Lawn Tennis Championships at the All England Lawn Tennis and Croquet Club on July 6, 2017 in London, England. (Photo by Shaun Botterill/Getty Images)

Roger Federer Announces He Will Miss Remainder Of 2020 Season