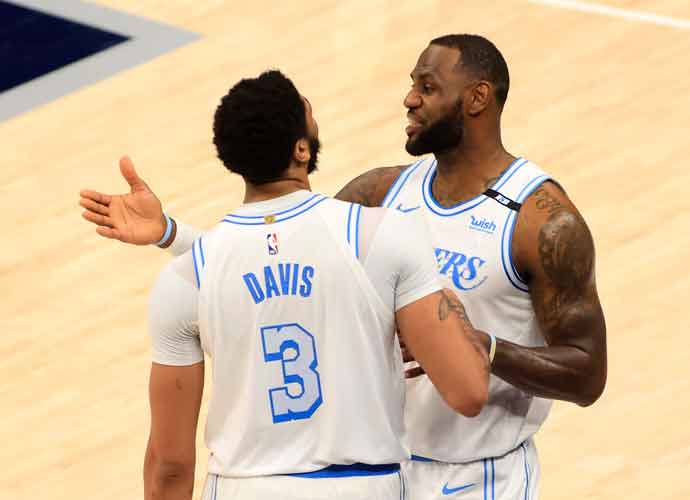 INDIANAPOLIS, INDIANA - MAY 15: LeBron James #23 of the Los Angeles Lakers and Anthony Davis #3 of the Los Angeles Lakers talk on the court in the game against the Indiana Pacers at Bankers Life Fieldhouse on May 15, 2021 in Indianapolis, Indiana. NOTE TO USER: User expressly acknowledges and agrees that, by downloading and or using this photograph, User is consenting to the terms and conditions of the Getty Images License Agreement. (Photo by Justin Casterline/Getty Images)

After suffering a groin injury Wednesday against the Clippers, LeBron James remains optimistic that he can return to action for the Lakers on Friday against the Sacramento Kings. But though the injury appears minimal at this point, it is an early sign of wear and tear on an aging Los Angeles roster that has already been struggling at full strength all season.

LeBron James on his injury #LALvsLAC

With James, Anthony Davis, Russell Westbrook and Patrick Beverley on the floor for the majority of the team’s first 11 games, the Lakers have still struggled mightily to begin the 2022-23 season, going 2-9 and ranking 14th in the Western Conference. Last season, the team was a playoff contender until Davis and James had to miss time with injuries. Similar setbacks this season could have calamitous results.

This is not the first groin injury for James, who has had to sit out games in the past with similar issues. Even if it isn’t severe this time around, small setbacks like this have a way of compiling for aging NBA stars. James has not managed to play a full 82-game season since 2018 with the Cleveland Cavaliers. Similarly, Davis’ last full season came as a member of the New Orleans Pelicans.

In the past, health setbacks for James and Davis have cost the Lakers playoff spots, but the 2022-23 season is different because the team hasn’t been competitive with them on the floor. If the two stars were absent at this point, the team would likely collapse into complete obscurity.

Projecting injuries and missed time for athletes is a difficult and unpleasant task, but based on recent seasons, it’s difficult to see the Lakers maintaining their core for the duration of the season. James’ groin injury early this season isn’t concerning on its own — it’s concerning because it’s unlikely to be the last and could be aggravated later on. It’s a nightmare for the sputtering dynasty.