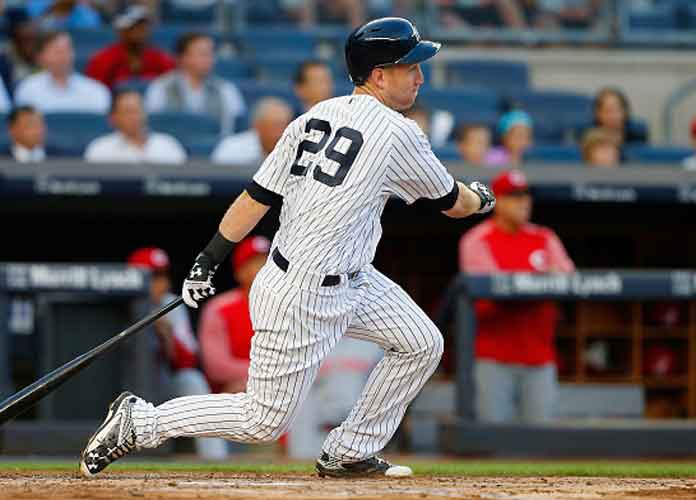 The first cut is always the deepest.

Todd Frazier learned that on Tuesday night when he stepped up for his first home hit as a New York Yankee in the second inning of a 4-2  win against the Cincinnati Reds.

The third baseman — acquired by the Yankees last week in a deal with the Chicago White Sox — walked up to the plate with the bases loaded and no outs in the second after Matt Holliday and Didi Gregorius both singled to right and Chase Headley singled to left off rookie Reds starter Luis Castillo.

Frazier — who played for Cincinnati from 2011 to 2015 before joining the White Sox — then smacked a hard grounder up the middle off Castillo. Reds shortstop Jose Peraza fielded it, stepped on second and threw to first. Gregorius remained vigilant on second base, waiting in case the ball was caught. Gregorius was late to advance, and Joey Votto’s toss across the diamond trapped the Yankees shortstop. Gregorius was called out for running wide of the baseline while attempting to avoid being tagged.

Holliday scored on the triple play to give New York a 1-0 lead.

“I might’ve set a record,” Frazier said afterward. “Got to be a record.”

Frazier was correct: the previous time a run scored on a triple play was during a Mariners-Twins game on May 27, 2006. More generally, it was the first triple play turned by Cincinnati since 1995 and the first against the Yankees since 2011, as well as the second 6-3-5-6 triple play in MLB history after the Pittsburgh Pirates turned one against the Los Angeles Dodgers in 1970.

“Can laugh about it now,” Frazier said. “At the time, I was pretty upset. It was just unbelievable. Hopefully, that doesn’t ever happen again.”

Once the game began, Frazier received a welcoming introduction from the public-address announcer as well as an ovation from his new fans.

The third baseman also had a large group of relatives and friends watching him from the stands.

Yankees manager Joe Girardi was visibly disappointed by the play, after which he could only look in despair from the dugout.

Meanwhile, Castillo — who was playing in his seventh major league game — said he would remember the moment forever.

“I will never forget that. Triple play, bases loaded. That’s amazing,” he said. “If double play’s the best friend of a pitcher, what about a triple play?”

Gregorius homered for the Yankees in the bottom of the eighth inning on Tuesday to seal the win.

The Yankees (52-46) are one game behind the Red Sox for the lead in the American League East. New York also beat the Reds 9-5 on Wednesday and next hosts the Tampa Bay Rays on Thursday at 7:05 pm EST for the opener of a four-game series.