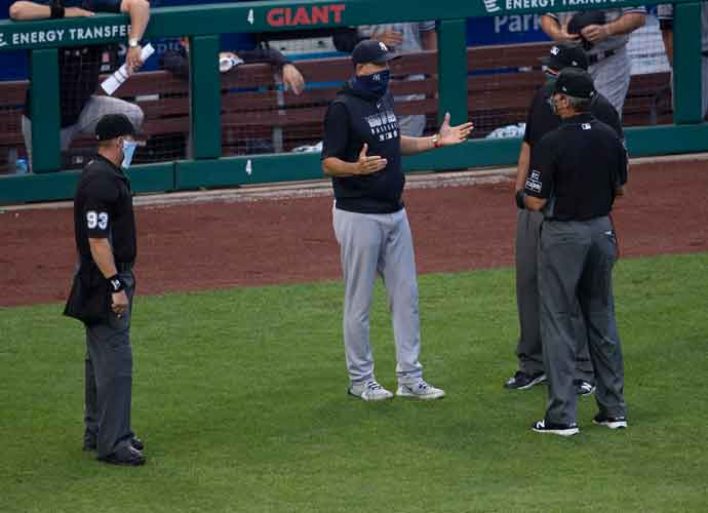 PHILADELPHIA, PA - AUGUST 06: Manager Aaron Boone #17 of the New York Yankees talks to the umpires during the game against the Philadelphia Phillies at Citizens Bank Park on August 6, 2020 in Philadelphia, Pennsylvania. The Phillies defeated the Yankees 5-4.

In a world where sports have no fans, we should have known that Philadelphia fans would find a way to disrupt other teams even when they couldn’t be in the stadium. During Thursday’s game between the New York Yankees and Philadelphia Phillies apparently fans congregated outside Citizen Bank Park’s center field and blew air horns when the Yankees were up to bat. Yankees manager Aaron Boone was obviously displeased by this and let the game’s umpires know as much.

Yankees manager Aaron Boone is apparently NOT a fan of the airhorn that Phillies’ fans have outside the ballpark and complained. 😂 pic.twitter.com/tafCDeqLkZ

“In the environment, we’re in, it’s almost like a golf environment … so I thought it was a timing thing,” Boone said. “I didn’t necessarily know if (the umpires) could do anything about it. I didn’t know who or where it was coming from. It was something I at least wanted to point out.” These Philly fans have aptly named themselves the “Fandemic Crew” and while this is probably a bad look for any other city’s fans this is just keeping form for Philly fans,

“It’s great! Honestly, its nice to at least hear something out there… they had the horn going pretty well tonight and I heard a few of their chants, it’s fun”@6abc pic.twitter.com/QUtM5LTyYy