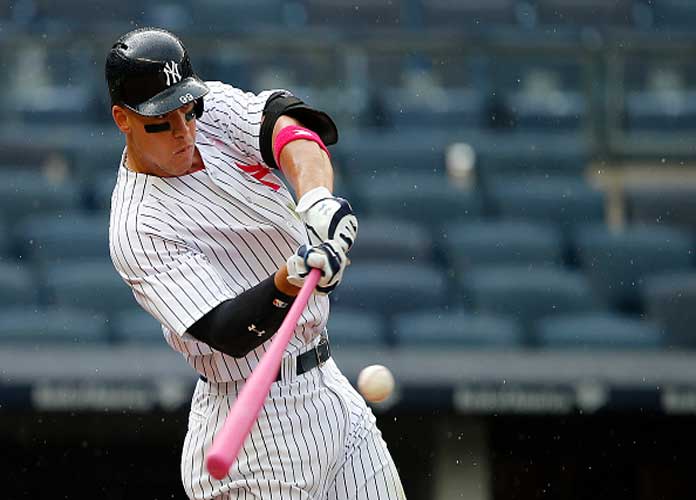 NEW YORK, NY - MAY 14: Aaron Judge #99 of the New York Yankees hits a two-run homer during the fourth inning against the Houston Astros during game one of a doubleheader at Yankee Stadium on May 14, 2017 in New York City. Players are wearing pink to celebrate Mother's Day weekend and support breast cancer awareness. (Photo by Rich Schultz/Getty Images)

Though he is only in his first MLB season, Aaron Judge is tied for the league lead in home runs with 14.  Nevertheless, the New York Yankees outfielder is still not immediately identifiable to many fans.

Aaron Judge Asks Yankee Fans About Himself on Tonight Show

This was never more apparent than on NBC’s Tuesday night episode of “The Tonight Show” with Jimmy Fallon. Judge, who has been hitting .316/.420/.744 overall this season after playing just 33 games, participated in a segment on the nightly comedy series in which he sat at an anchor desk by New York’s Bryant Park and asked around 20 baseball fans how familiar they are with the Yankees and with the 25-year-old rookie specifically.

The sketch revealed that most Yankee supporters still can’t quickly recognize Judge, despite the outfielder’s imposing 6-foot-7, 282-pound frame. Judge simply donned a suit and a pair of glasses for the bit, but this disguise proved enough to trick New Yorkers into thinking they were speaking to an actual sportscaster who was asking them about their favorite players on the Yankees.

“How many homers do you think he’ll finish [the season] with?” Judge asks (referring to himself) one man who cites the outfielder as his favorite player. “Forty,” replies the man. “He can’t keep up this pace, I don’t think,” the man adds after the rookie seems to doubt the fan’s prediction.

“I think he can, though” says Judge, before suggesting he could reach 70 home runs this seasons to top the fan’s prediction, which increases to 60 homers.

Aaron Judge on his Tonight Show cameo: “it turned out better than I thought. I was pretty nervous.”

Another fan incorrectly called the outfielder “Adam Judge,” but the rookie played along.

A third fan laughed and joked around with Judge after realizing he had been tricked into speaking with the Yankees star the entire time. The fan compared Judge to another prominent New York sports figure, former Giants defensive end Michael Strahan, for the gap between his teeth. “You’re the future, man,” says the fan with a smile and a chuckle. “We love you here.”

The last fan, an middle-aged woman, even got a hug and a photo with Judge.

COVER STORY: Powerful Yankees slugger Aaron Judge stands out, but all he wants to do is blend in https://t.co/bmakus0YNV pic.twitter.com/Dv06D1lqnH

The Yankees (23-13) are currently first in the AL East. They defeated the Kansas City Royals 7-1 at Kauffman Stadium on Tuesday, the opener of a three-game series. The two teams face off in Kansas City again at 8:15 pm EST on Wednesday.
NEW YORK, NY – MAY 14: Aaron Judge #99 of the New York Yankees hits a two-run homer during the fourth inning against the Houston Astros during game one of a doubleheader at Yankee Stadium on May 14, 2017 in New York City. Players are wearing pink to celebrate Mother’s Day weekend and support breast cancer awareness. (Photo by Rich Schultz/Getty Images)