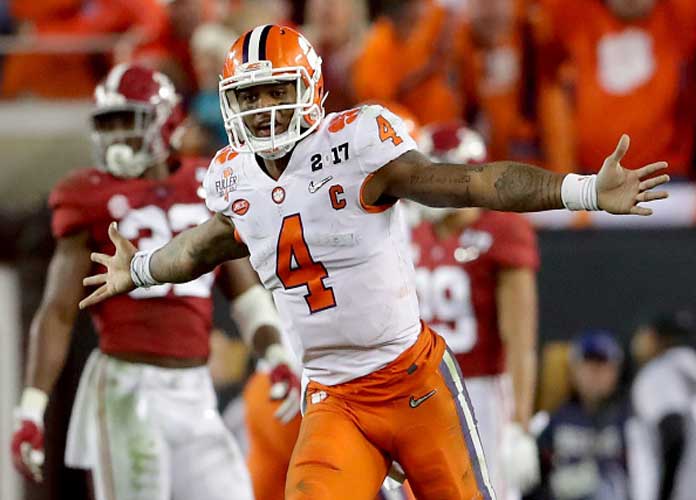 Deshaun Watson made a name for himself by winning a national championship as a college football player, and now he has made headlines just one month into his professional career.

The Houston Texans rookie quarterback — a former Clemson star — donated his first game check to three women who work in the NRG Stadium cafeteria and who were particularly affected by the damage caused by Hurricane Harvey.

“For what you all do for us every day and never complain, I really appreciate you all, so I wanted to give my first game check to y’all to help y’all out in some type of way,” Watson told the woman in a video shared by the Texans. “Here you guys go.”

The women couldn’t help but cry and hug the 22-year-old quarterback.

“If you can, you must.”@deshaunwatson​ gave his first @NFL​ game check to help a few familiar faces. #HoustonStrong pic.twitter.com/rwcyGMSRFN

Watson — the 12th overall pick in this year’s draft — helped lead Clemson to a national championship appearance in 2015 and victory over Alabama in 2016.

Clemson coach Dabo Swinney praised Watson for his maturity and dedication. Swinney event went as far as to say before the 2017 draft that any teams that passed on him would feel the same regret NBA teams experienced after passing on Michael Jordan.

It’s not much of a surprise Watson has become involved in charity, as he is surely paying forward a good deed a former NFL star did for him. Years prior, former Atlanta Falcons running back Warrick Dunn partnered with Habitat for Humanity to secure Watson a home.

Watson’s charitable deed follows that of another Texans player: Pro-Bowl defensive end J.J. Watt, who helped raise over $14 million via an online campaign for victims of Hurricane Harvey.

The Texans (1-2) next host the Tennessee Titans on Sunday.