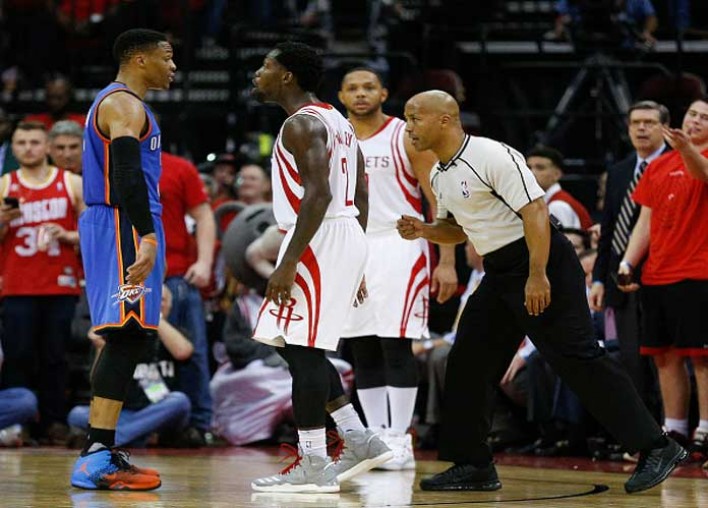 HOUSTON, TX - APRIL 25: Russell Westbrook #0 of the Oklahoma City Thunder and Patrick Beverley #2 of the Houston Rockets confront each other in the fourth quarter during Game Five of the Western Conference Quarterfinals game of the 2017 NBA Playoffs at Toyota Center on April 25, 2017 in Houston, Texas.

Russell Westbrook and Patrick Beverley exchanged heated words in the fourth quarter of the Houston Rockets’ series-clinching, Game 5 home victory over the Oklahoma City Thunder on Tuesday night, after Westbrook fouled Beverley for a fourth time.

Midway through the final period, as the Rockets led 90-87, Westbrook attempted to grab a bad pass by jumping but lost control of the ball and pushed Beverley to the ground near the sideline. Naturally, the Houston guard confronted his Oklahoma City counterpart and a tense verbal spat ensued that led to their teammates, as well as coaches, to split them up.

Beverley, who finished with 15 points, explained what exactly happened in the post-game press conference: He said he felt Westbrook became arrogant after scoring 40 points (the All-Star actually finished with 47 points and fell one assist short of a triple-double) and believed nobody could guard him.

“That’s actually the first time we’ve exchanged words this postseason,” said Beverley. “But he’s a really good player. He applies a lot of pressure just due to his athleticism and his creating ability.”

The Rockets guard continued: “But it shocked me, because he looked up and said, ‘No one can guard me, I got 40 points.’ I said, ‘That’s nice. You took 34 shots to get it.’ I’m not out here trying to bash anybody, but I mean, men lie, women lie, but the numbers don’t. Collectively, as a unit, we’ve done a great job on him. We tried to make him shoot a lot of tough shots, and the numbers show it.”

Westbrook, who received a technical for arguing with Beverley, also detailed his own version of the incident, telling reporters after the game that the Houston guard bragged about being “first-team All-Defense.”

The Rockets advanced to the second round of the NBA Playoffs by winning the series 4-1 with their 105-99 victory over the Thunder. Houston will next face the winner of the Memphis-San Antonio series in the Western Conference Semifinals.

Houston used a 5-1 run, with all their points coming on free throws, to gain a 98-91 lead over Oklahoma City in the fourth quarter. The Rockets, who only made one of 13 3-point attempts in the third period, simply began running down the clock after Harden made a layup with about three minutes remaining and the Thunder missed one shot after another.

Westbrook, who had 20 points in the third quarter, also had 11 rebounds and nine assists and made only two of 11 fourth-quarter shots in a lackluster end to a great season during which he became the first player since Oscar Robertson in 1961-62 to average a triple-double by scoring an NBA-best 31.6 points a game, with 10.7 rebounds and 10.4 assists. Westbrook also set a league record for most triple-doubles with 42 to help Oklahoma City manage the loss of All-Star Kevin Durant to the Golden State Warriors last offseason. Victor Oladipo contributed ten points and eight rebounds for the Thunder, and Alex Abrines added 11 points.

The Rockets led 51-44 at halftime. The hosts were upset with a few calls in the first quarter, and team owner Leslie Alexander rose from his court-side seat to walk over to a referee during play late in the period to argue before sitting down again.

HOUSTON, TX – APRIL 25: Russell Westbrook #0 of the Oklahoma City Thunder and Patrick Beverley #2 of the Houston Rockets confront each other in the fourth quarter during Game Five of the Western Conference Quarterfinals game of the 2017 NBA Playoffs at Toyota Center on April 25, 2017 in Houston, Texas. 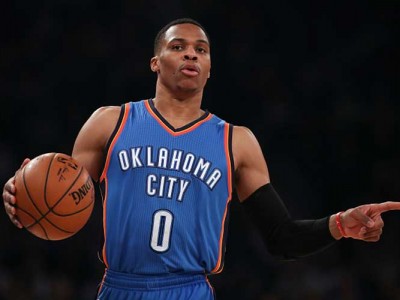