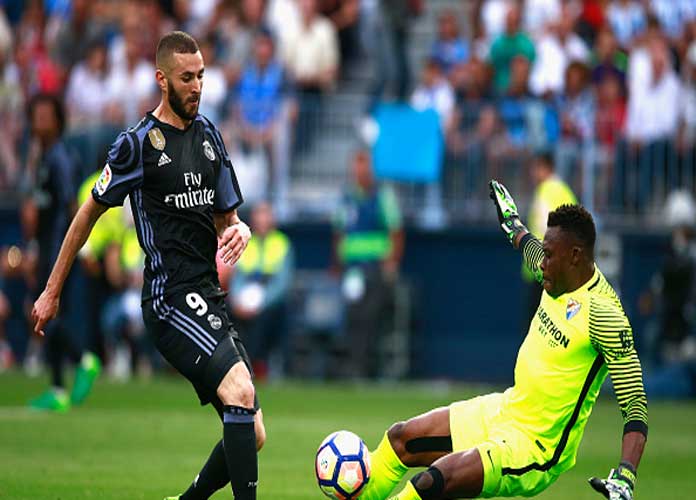 MALAGA, SPAIN - MAY 21: Idriss Carlos of Malaga makes a save from Karim Benzema of Real Madrid during the La Liga match between Malaga and Real Madrid at La Rosaleda Stadium on May 21, 2017 in Malaga, Spain. (Photo by Gonzalo Arroyo Moreno/Getty Images)

Real Madrid secured their first La Liga title since 2012 on Sunday with a 2-0 victory at Malaga thanks to goals from Cristiano Ronaldo and Karim Benzema.

Ronaldo opened the scoring in just the second minute by holding onto Isco’s through ball after Malaga’s Luis Hernandez accidentally fed the Real Madrid midfielder. After taking Isco’s passs, Ronaldo side-stepped Cameroonian goalkeeper Carlos Kameni near the edge of the area and shot into an empty net for his 25th goal of the season.

The 32-year-old Portuguese striker has recorded 14 goals in his last nine games with Los Blancos.

“Goooal from @Cristiano, goooooal from @realmadrid, horrible mistake on defense by the hosts that the Portuguese star takes advantage of, #beINLaLiga” beIN SPORTS Español tweeted in a video of the game’s opening goal:

“Goooooal from @realmadrid, gooooal from @Benzema who takes advantage of a dead ball in the are and scores the second merengue, #beINLaLiga” beIN SPORTS Español also tweeted in a video of the French forward’s goal:

Malaga’s Sandro Ramirez had the opportunity to tie it 1-1 after 12 minutes, but Madrid goalie Keylor Navas saved his low shot at the near post where the hosts’ players were seeking to score off a cross.

Navas suffered a rib injury in the 20th minute, when he crashed into the goal frame while making a one-handed block to turn the ball around the post on a free-kick from Ramirez.

Kameni made a great save to deny Ronaldo in the 33rd minute, when Benzema’s cross was permitted to run by Mikel Villanueva. The hosts’ goalie also stopped a low shot from Kroos shortly afterwards.

Ronaldo appeared to suffer a knee injury at the beginning of the second half following a challenge from Malaga’s Federico Ricca, but the Portuguese forward chose to keep playing.

The win gave Real Madrid their 33rd Spanish league trophy. Los Blancos next face Juventus in the UEFA Champions League final on June 3 at Millennium Stadium in Cardiff, Wales. Should Real defeat the Italian club, they will become the first team to successfully defend the Champions League.

Zinedine Zidane’s team, who needed only one point to secure the title, are also the first squad in franchise history to score in every La Liga game of the season, including 58 goals on the road, the highest ever in a Spanish League season. Los Blancos finished the 2016-2017 campaign with 93 points.

Barcelona, who had won La Liga the past two years, rallied from 2-0 down to defeat Eibar at home on Sunday, but would have needed Real Madrid to lose in order to secure the title for the third straight year. The Catalan club ended the season with 90 points.

Zidane was surprised by his celebrating players during the post-match press conference! 😂🍾🙌#MalagaRealMadrid pic.twitter.com/PckcBYtasS

Zidane won the La Liga title as a player for Real Madrid in 2003, and Sunday marked his first Spanish league victory as a manager. The Frenchman, who will be 45 in June, took over Carlo Ancelotti’s position as the club’s head coach in 2016. Zidane also won the Champions League just six months into his new role last summer.

Jose Mourinho was the last manager to lead Real to a La Liga trophy in 2012.

Zinedine Zidane, a #LaLigaSantander winner with @realmadriden as a player… and now as a manager! 🙌🏆 pic.twitter.com/TSBZjwFNPN

“It was very important [to win the league]. It was a lot of years without winning it and we knew that the league is everything,” Zidane said. “For Real Madrid, because it is the best club in the world, we have to return with this league title.

“It has been a difficult season that we worked hard for, with some tough moments, but after 38 games we are top and that is it.

“The Spanish league is the best in my opinion and to win it in this way is incredible – I am very happy.

Real have scored in their last 64 games in all competitions, the best run by a team from the top five European leagues.

MALAGA, SPAIN – MAY 21: Idriss Carlos of Malaga makes a save from Karim Benzema of Real Madrid during the La Liga match between Malaga and Real Madrid at La Rosaleda Stadium on May 21, 2017 in Malaga, Spain. (Photo by Gonzalo Arroyo Moreno/Getty Images)