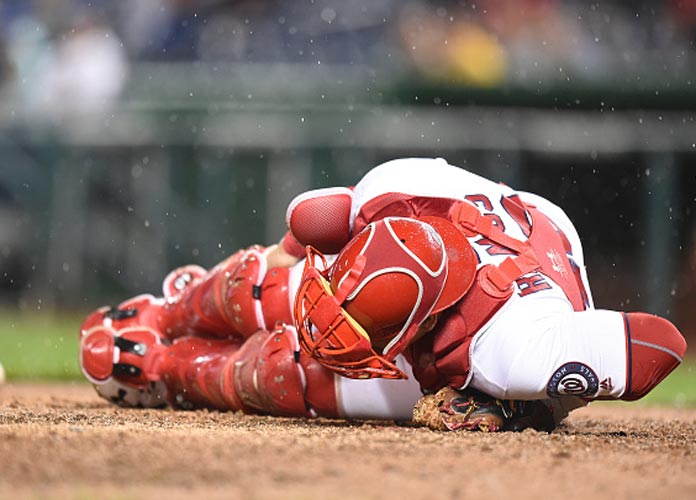 WASHINGTON, DC - SEPTEMBER 26: Wilson Ramos #40 of the Washington Nationals lies in pain after slipping on play at the plate in the fifth inning during a baseball game against the Arizona Diamondbacks at Nationals Park on September 26, 2016 in Washington, DC. (Photo by Mitchell Layton/Getty Images)

Tampa Bay Rays catcher Wilson Ramos had a rough night on Monday when he was struck in the head with a broken bat in a 5-0 home loss to the Baltimore Orioles.

In the fifth inning, Orioles shortstop Ruben Tejada swung at a fastball from Rays lefty Blake Snell and his batt shattered. The broken barrel soared over Tejada’s shoulder and hit Ramos on the top of his head, as well as home plate umpire Joe West’s mask.

The Venezuelan catcher — who was fortunately wearing a helmet — was immediately tended to by trainers at home plate and carried back into the dugout at Tropicana Field after bleeding and suffering a cut on his forehead.

Scary scene in Tampa as Wilson Ramos took a bat off his head in the 5th. pic.twitter.com/iCXyslSkCl

Ramos was replaced by Jesus Sucre, and Tejada ended up grounding out as Baltimore maintained a 1-0 lead.

The Rays provided no update as to when Ramos could return to the lineup, although the catcher said following the game that he felt ok enough to play the next game on Tuesday if needed and if the doctors allowed hm to. If not, Ramos added, he would like to play again on Wednesday.

“The barrel of the bat just hit my helmet,” Ramos said. “The impact cut me. But the helmet was perfect, it never broke. I felt sore at the moment. … If the bat hadn’t cut me, I would have probably stayed in the game. There was a lot of blood in my hand. I told the trainers, ‘If it’s not big, I want to stay in the game.’ But they said it was bleeding a lot and they had to take me out of the game.”

Wilson Ramos is out of the game after a broken bat struck his helmet. We’ll pass on any additional info as it’s available. pic.twitter.com/KB3DzFYSZ0

Ramos had to receive six staples in his head due to the hit.

“He’s fine, other than the fact he has six staples in his head,” Rays manager Kevin Cash said. “He won’t play [Tuesday], or won’t start, I should say. But we’re confident he feels good. A little bit of a scare there. I think Wilson would have preferred to stay in the game, we just weren’t able to prevent him from bleeding.”

The Rays face the Orioles again on Tuesday night in the second game of a three-game series in Tampa.

WASHINGTON, DC – SEPTEMBER 26: Wilson Ramos #40 of the Washington Nationals lies in pain after slipping on play at the plate in the fifth inning during a baseball game against the Arizona Diamondbacks at Nationals Park on September 26, 2016 in Washington, DC. (Photo by Mitchell Layton/Getty Images)