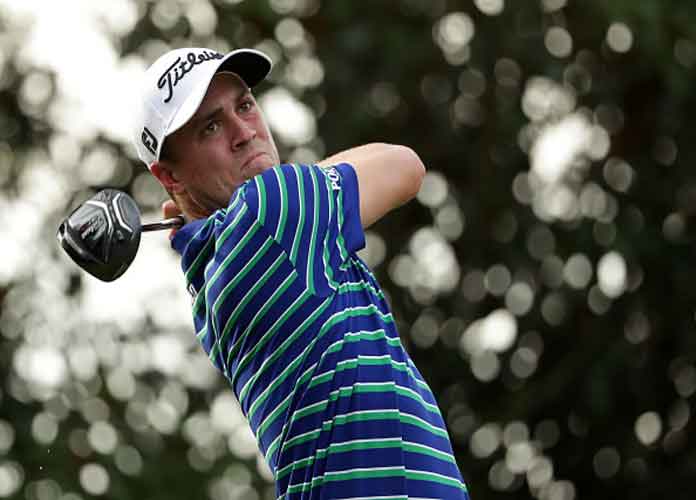 Justin Thomas won the 99th PGA Championship in Charlotte, North Carolina on Sunday to secure his first major title, and several of his shots stood out.

One putt that particularly drove the crowd at Quail Hollow wild was a chip-in on the par-5 tenth hole. After sinking a 36-footer for birdie on hole No. 9, Thomas added another birdie from eight feet on the tenth when the ball hung on the edge of the cup for about 10 seconds before tumbling into the hole.

The Louisville, Kentucky native — who is now the World No. 6 golfer — also hit a tee shot on the tenth that hooked way left into the trees, then miraculously rebounded in the fairway. That put Thomas in a five-way tie for the lead with Francesco Molinari, Hideki Matsuyama, Kevin Kisner and Chris Stroud.

Thomas, 24, also wowed on the par-3 13th, where a chip-in from 40 feet for a birdie gave him a two-shot lead. He ultimately finished with a 72-hole total of eight-under 276, two strokes ahead of the runners-up, Molinari and Patrick Reed, who both ended with 67s, and Louis Oosthuizen, the 2010 British Open champion, who closed a 70.

What a final round. 🙌

Relive Sunday’s drama with the best shot from every hole! #PGAChamp pic.twitter.com/zv69q2FhO4

“I just stayed patient and knew scores were not going to be crazy low,” Thomas said. “And that chip-in on 13 was huge.”

Thomas had made the cut for the U.S. Open earlier this year after carding a third-round 63 but fell behind eventual winner Brooks Koepka after three-putting three times on the final front nine. Thomas missed out on qualifying for the British Open, however, after posting a second-round 80.

“I just had an unbelievable calmness throughout the week, throughout the day,” added Thomas, who won $1.89 million. “I truly felt like I was going to win. I remember my girlfriend was supposed to fly out at about 7 and I was like, ‘You need to change your flight to later, because I don’t know, I just feel like I don’t want you to miss this. I feel like I’m going to get it done.’ I just was very confident. …

“I just didn’t get flustered. I felt like I kind of kept everything in front of me.”

Thomas’ father Mike — who first taught him how to golf — was one of the first to congratulate the youngster after his major victory.

All the feels between father and son for @JustinThomas34 pic.twitter.com/aG6goo6kQe

Matsuyma, 28, was attempting to become the first Japanese player to win a men’s major but finished fifth after tying for second early in Sunday’s final round.

Jordan Spieth was seeking to continue his winning streak this year after claiming the AT&T Pebble Beach Pro-Am in February and the Travelers Championship and British Open earlier this summer. However, the 24-year-old winner of the 2015 Masters and U.S. Open fell ten strokes short in his bid to become the youngest player to win all four majors (Masters, U.S. Open, British Open, PGA Championship). With rounds of 72-73-71-70, Spieth —the World No. 2 — finished 3 over.

Rory McIlroy, meanwhile, announced he could be out for the rest of the year after suffering a rib injury. The 28-year-old Northern Irishman — the World No. 4 — finished Sunday’s Championship with a round of 68 that left him tied for 22nd overall.

“You might not see me until next year,” McIlroy said after finishing one over par for the event. “You might see me in a couple of weeks’ time. It really depends.”

McIlroy sustained the injury earlier this year and said it had flared up again, which is why he had decided to take an indefinite break from the Tour.

“Right now, I can feel my left rhomboid going into spasm,” he said. “Inside of my left arm goes numb.”

The Belfast native has not won since the Tour Championship a year ago and has not had a major victory since 2014, when he captured his second P.G.A. Championship in Louisville.

CHARLOTTE, NC – AUGUST 12: Justin Thomas of the United States plays his shot from the 16th tee during the third round of the 2017 PGA Championship at Quail Hollow Club on August 12, 2017 in Charlotte, North Carolina. (Photo by Streeter Lecka/Getty Images)