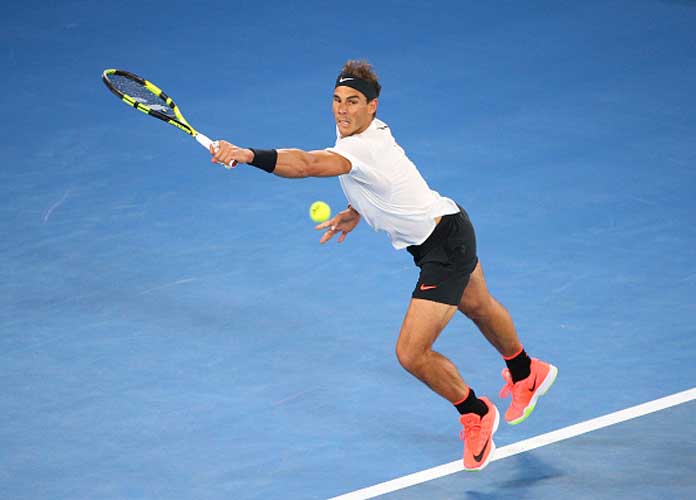 MELBOURNE, AUSTRALIA - JANUARY 25: Rafael Nadal of Spain plays a backhand in his quarterfinal match against Milos Raonic of Canada on day 10 of the 2017 Australian Open at Melbourne Park on January 25, 2017 in Melbourne, Australia. (Photo by Michael Dodge/Getty Images)

I don’t want to brag or anything, but if you read my French Open betting review and took my advice then you would be rolling in the dough right now. Anyone who follows tennis knows that Rafael Nadal is the king of clay. His dominance of the French Open has been a sight to see, capturing 13 titles in the last 20 years and going 100-2 all-time. You didn’t misread that, 100-2.

In Sunday’s final against Novak Djokovic, Nadal established his dominance again but also passed the fantastic milestone of 20th grand slam titles tying Roger Federer for most all-time. “I have always had the utmost respect for my friend Rafa as a person and as a champion. As my greatest rival over many years, I believe we have pushed each other to become better players,” Federer wrote on Twitter. “Therefore, it is a true honor for me to congratulate him on his 20th Grand Slam victory. It is especially amazing that he has now won Roland Garros an incredible 13 times, which is one of the greatest achievements in sport. I also congratulate his team, because nobody can do this alone. I hope 20 is just another step on the continuing journey for both of us. Well done, Rafa. You deserve it.”

Nadal and Federer have been battling it out for all of the past decade and most of the 2000’s effectively making the rest of the division save for Djokovic just bystanders to their greatness. It feels like the end of the road will be approaching soon for Nadal despite the fact that he is only 34 years old as opposed to Federer who is 39.