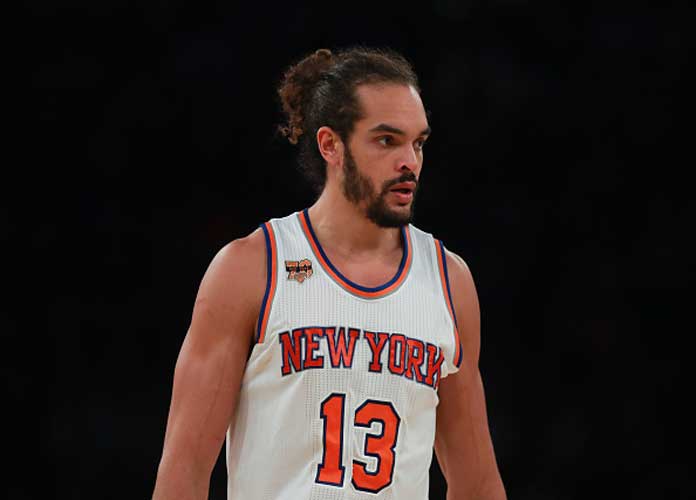 NEW YORK, NY - OCTOBER 29: Joakim Noah #13 of the New York Knicks looks on against the Memphis Grizzlies during the first half at Madison Square Garden on October 29, 2016 in New York City.

Joakim Noah shot a free throw so terribly even he couldn’t help but immediately cringe.

The New York Knicks center put up a free throw in the first quarter in Monday night’s 109-103 road victory over the Indiana Pacers, and it ended up being an airball that flew left of the rim.

Noah, understandably upset with his shot, grimaced as his free throw percentage slipped to under 42.9 percent.

SCREAMING at this Joakim Noah airball FT and his reaction pic.twitter.com/8Tjpxcu10L

That figure has only sunk further and further for Noah since his All-Star days in Chicago. The French first-year Knick finished the 2012-2013 season with a 75.1 percent completion rate as a player for the Bulls.

After the Knicks (20-26) blew a 17-point lead over the final 17 minutes, Carmelo Anthony came to New York’s rescue just in time.

With the score tied at 103 and 23.4 seconds remaining, Anthony beat a switch and scored a 14-foot baseline jumper to help his team secure the win.

”I don’t even want to think about that – if this one got away,” Anthony said after scoring 26 points and grabbing five rebounds. ”This is the time where we have to come together as a group and lock in and figure this thing out.”

With the victory, the Knicks ended a two-game skid overall and a nine-game regular-season losing streak at Indiana, where New York last won on March 17, 2012.

Derrick Rose finished with 20 points and six assists, but also had two turnovers in the final three minutes. The former Bulls star also contended that a missed layup with 2:19 left was a goaltend, and he got caught arguing with the ref when the Pacers raced to the other end for a putback dunk. Indiana has lost three straight.

“It was devastating the five, six games we lost like this. All of it was devastating,” Rose said. “This one would’ve been another one on the list. But like I said, it makes you a better team.”

Paul George’s free throws tied the score at 103 with 42 seconds left, and finished with a game-high 31 points for Indiana. The Pacers (22-22) led by 14 in the first quarter, while Kristaps Porzingis played a terrible first half (he eventually fouled out with just eight points).

The Knicks are 11th in the Eastern Conference, and are only 2.5 games out of the eighth spot held by the Bulls.

“This a tough stretch for us with these close losses. We were three over .500 at one point, and then we hit this stretch,” Knicks coach Jeff Hornacek said. “Got some bad breaks, but you have to make your own breaks sometimes.

“Guys know that if they keep playing and they’re not dropping their heads — yeah, they’re frustrated they’re losing — but when they go out on the court they’re still trying to do the right things.”

The Knicks next visit the Dallas Mavericks on Wednesday, while the Pacers will play on Thursday at Minnesota, where they have won two in a row.

NEW YORK, NY – OCTOBER 29: Joakim Noah #13 of the New York Knicks looks on against the Memphis Grizzlies during the first half at Madison Square Garden on October 29, 2016 in New York City.