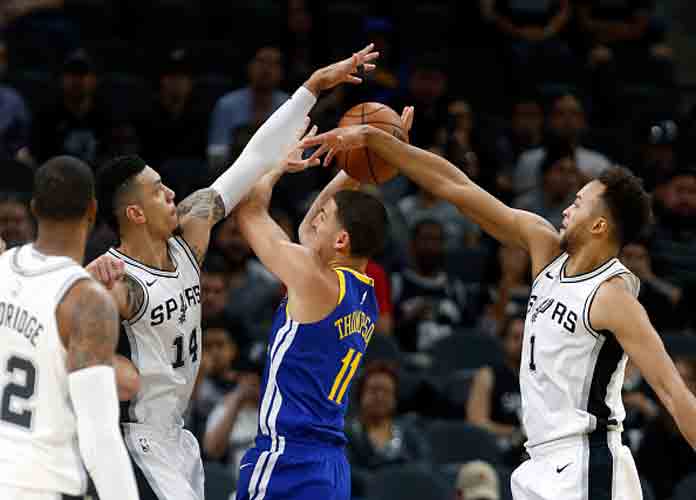 SAN ANTONIO,TX - NOVEMBER 2: Danny Green #14 of the San Antonio Spurs and Kyle Anderson #1 of the San Antonio Spurs com line to block the shot attempt of Klay Thompson #11 of the Golden State Warriors at AT&T Center on November 2, 2017 in San Antonio, Texas. NOTE TO USER: User expressly acknowledges and agrees that , by downloading and or using this photograph, User is consenting to the terms and conditions of the Getty Images License Agreement. (Photo by Ronald Cortes/Getty Images)

Klay Thompson scored 27 points, and the Golden State Warriors rebounded from an early beating to secure a 112-92 road victory over the San Antonio Spurs on Thursday night.

The defending NBA champions are now 6-3, while the Spurs are 4-4.

Courtside microphones picked up Gregg Popovich cursing at the referee, and the Spurs coach was ejected in the fourth quarter after drawing a second technical foul for arguing with an official. Steve Kerr also briefly became upset before Popovich was tossed.

Kerr was held back by assistant Mike Brown after he was given a technical foul.

“We might as well start every game here down 20 — other than the playoffs last year, that’s been four or five straight games where that’s happened,” Kerr said after San Antonio gained a 28-12 lead in the opening quarter. “They have an edge on us with their size and strength and we weren’t ready to battle early, and that’s why we fell behind. Once we started competing and running and pushing the ball, we got into a good groove.”

“In the first half, our intensity was there, or focus was there, but we just gave up too many offensive rebounds and broken play open 3s — and they hit a bunch of them,” Curry said. “Against this team if we can get stops, especially when they have their bigs out there and our playmakers rebound and push and run the wings, things will work in our favor.”

LaMarcus Aldridge led the Spurs with 24 points and ten rebounds, while Kyle Anderson had 16 points.

“Whether you win or lose, it’s a game of mistakes,” Popovich said afterwards. “We lost against the best team in the world and there’s a lot of things we need to improve on.”

The Warriors next visit Denver on Saturday night, while the Spurs will host the Charlotte Hornets on Friday night.