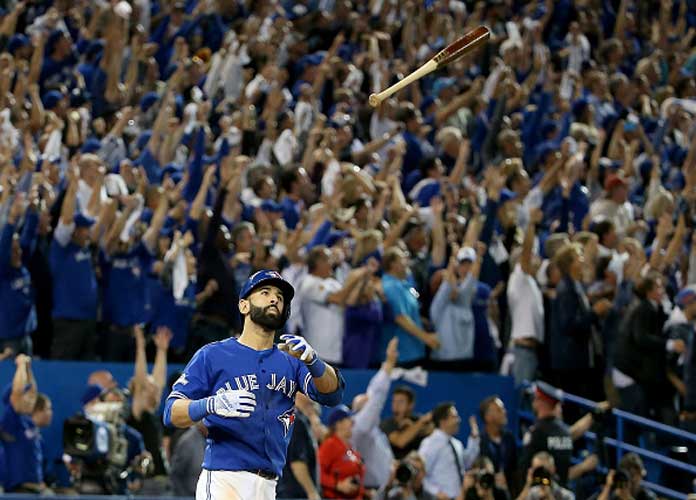 TORONTO, ON - OCTOBER 14: Jose Bautista #19 of the Toronto Blue Jays flips his bat up in the air after he hits a three-run home run in the seventh inning against the Texas Rangers in game five of the American League Division Series at Rogers Centre on October 14, 2015 in Toronto, Canada. (Photo by Tom Szczerbowski/Getty Images)

Jose Bautista hit a solo homer late in the Toronto Blue Jays‘ 8-4 road loss to the Atlanta Braves on Wednesday night and flipped his bat in celebration, causing both teams’ benches to clear and start an all-out — yet non-violent — brawl.

Toronto was trailing 8-3 in the top of the eighth inning when Bautista smacked a homer into the left-field seats off Eric O’Flaherty to score the Jays’ final run. Right after his hit, however, the Dominican outfielder showed off his bat-flip, which drew the ire of the Braves and caused both dugouts at SunTrust Park to empty after Bautista crossed home plate.

“He did it again,” @JoeyBats19 hit the ball out, saw it and celebrated with his famous “Bat Flip.” #TheMajors,” reads the following caption in Spanish.

The following video shows the benches clearing after Bautista’s home run, with the Spanish caption: “Jose Bautista blasted a big one in the eighth and the dugouts emptied:”

THIS IS NOT A DRILL!

“I’m surprised he’s ready to fight again after last year,” O’Flaherty told reporters with a laugh, referring to Bautista being punched by Texas Rangers second baseman Rougned Odor in 2016, a fight that Bautista instigated with his infamous bat-flip in 2015.

Bautista confessed after Wednesday’s homer that the flip “was definitely not something that was fitting for the moment.”

That moment in the eighth inning was the second time in Wednesday’s game in Atlanta that the benches cleared. The dugouts also emptied just one inning before. In the seventh, tension arose between Braves reliever Jason Motte and Blue Jays center fielder Kevin Pillar, who seemed to say something to Motte as the latter stepped off the mound.

The benches clear in Atlanta after Kevin Pillar takes exception to Jason Motte’s quick pitch in the top of the 7th inning!!! pic.twitter.com/fcwxtUWuYL

The Braves’ anger comes as no surprise, given that their players have been struck by the Blue Jays seven times since the four-game series began on Monday.

Earlier on Wednesday, Atlanta’s Freddie Freeman was forced to exit the game after being hit in the wrist by a pitch from reliever Aaron Loup.

The Braves (16-21, 2nd in NL East) lead the series 3-0 and have won five of seven games. The Blue Jays (17-24, 5th in AL East) have lost three straight games after winning five in a row, including a four-game home sweep of the Seattle Mariners.

The series finale is Thursday at 7:35 pm EST at SunTrust Park. Right-hander Marcus Stroman will start for Toronto. Stroman has allowed two runs or fewer in all but two of his eight starts this season, and recorded nine strikeouts in his last start against Seattle.

Julio Teheran, who has a 8.14 ERA in four home starts this year, will take the mound for Atlanta.

TORONTO, ON – OCTOBER 14: Jose Bautista #19 of the Toronto Blue Jays flips his bat up in the air after he hits a three-run home run in the seventh inning against the Texas Rangers in game five of the American League Division Series at Rogers Centre on October 14, 2015 in Toronto, Canada. (Photo by Tom Szczerbowski/Getty Images)
Read more about:
Atlanta Braves bat flip benches clear Jose Bautista MLB Toronto Blue Jays
Listen to the uInterview Podcast!
Get the most-revealing celebrity conversations with the uInterview podcast!