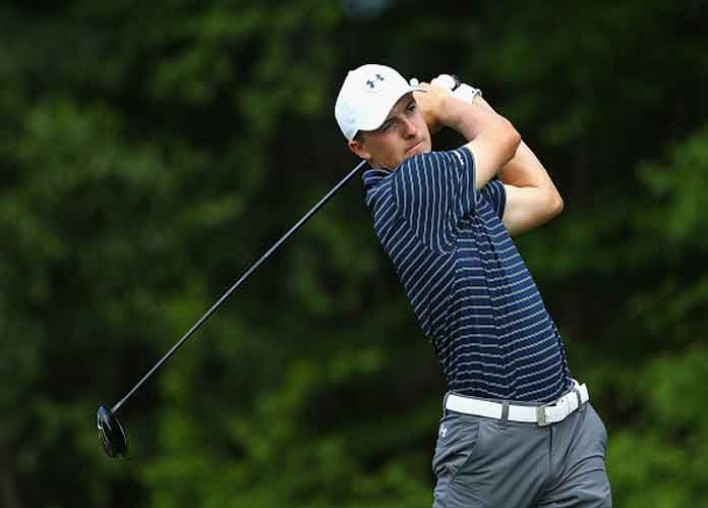 CROMWELL, CT - JUNE 25: Jordan Spieth of the United States plays his shot from the 14th tee during the final round of the Travelers Championship at TPC River Highlands on June 25, 2017 in Cromwell, Connecticut. (Photo by Maddie Meyer/Getty Images)

Jordan Spieth’s form may not be as strong as it was before, but he can still deliver some magic every now and then.

On Sunday, the 23-year-old Texan hit an impressive 60-foot shot for birdie from the green-side bunker on the 18th hole at TPC River Highlands in Cromwell, CT to win the Travelers Championship in a playoff against Daniel Berger. Spieth — a two-time major champion — celebrated his fantastic drive by throwing his club and chest-bumping his caddie Michael Greller.

“That was one for the ages,” said Spieth, who won the AT&T Pro-Am Tournament at Pebble Beach in February. The youngster couldn’t even see the hole from where he took the shot.

Justin Thomas — another 23-year-old PGA Tour golfer — predicted Spieth’s ace on Twitter moments before the shot happened. Here is what Thomas — a Kentucky native and University of Alabama alum who is the World No. 8 — tweeted shortly before Spieth’s big ace:

Wouldn’t be surprised if @JordanSpieth just holed this bunker shot

Spieth led by one stroke after each of the first three rounds on Sunday. The 2015 Masters and U.S. Open winner finished with an even-par 70 to tie Berger — who birdied three of the last six holes for a 67 — to tie Berger at 12-under 268.

Berger — who won the FedEx St. Jude Classic two weeks ago before missing the cut last week at the U.S. Open — narrowly missed a 50-foot putt from off the 18th green left that would have forced a second playoff hole.

“Jordan does Jordan things,” said Berger, who won PGA Tour Rookie of the Year in 2015. “So there’s not really much you can say. I’m obviously disappointed, but happy to be in the position I was in today.”

Hopefully the next time @JordanSpieth does that I’m on his team and I can chest bump him too !!

The 24-year-old Florida native entered the round in third place, thee shots behind. Berger matched Spieth for an advantage with a 5-foot birdie putt on the 15th while Spieth bogeyed on the 14th, and tied Spieth again with a birdie from eight feet at the 17th.

On the final hole, Berger hit his approach shot into the same bunker as Spieth, and also saved par to force the playoff.

Berger struck his drive on the first playoff hole left and into the crowd behind a fairway bunker. His approach then flew off the green toward the left.

“If I was in Berger’s shoes, I would be cursing Jordan Spieth right now for the break off the tee and then holing a 30-yard bunker shot, that’s a lot of luck,” Spieth said.

Greller, who reiterated Berger’s assessment of Spieth, also reminded the latter before he took his final shot on Sunday that “magic happens here.”

Spieth and Tiger Woods are now the only PGA golfers to reach ten victories in the Tour era before the age of 24 since World War II. Woods won 15 times before his 24th birthday.

Sunday’s victory also marked Spieth’s first win in a tournament debut. Phil Blackmar was the previous golfer to claim the Travelers Championship in his first start in 1985.

Spieth also had some mediocre shots on Sunday, however. His first came on the 13th hole, when his drive flew right but remained on the side of a hill to steer clear of the water. He missed a seven-foot birdie putt, but saved par.

The Texan then hit his tee shot on the 15th left, narrowly missing the water and the hazard line in the rough. He chipped to the middle of the green and recorded a 16-foot putt for birdie, which he initially believed he had missed.

Spieth’s shot at 17 initially seemed like it would end up in the lake, although the ball ultimately fell right on the edge of the green and he made par.

“That’s a lot of luck,” Spieth said. “But I took advantage of the good breaks and am happy to come out on top.”

Spieth took home $1.2 million for winning the Travelers on Sunday. He previously made a hole-in-one from a bunker in 2013 at the John Deere Classic in Illinois:

Grayson Murray logged the Travelers’ lone hole-in-one. The 23-year-old North Carolina native sank the 177-yard eighth hole in one shot to record his first ace on tour. Murray shot a 68 to finish at 5 under.

Spieth will next compete at the Open Championship in Southport, England on July 20.

CROMWELL, CT – JUNE 25: Jordan Spieth of the United States plays his shot from the 14th tee during the final round of the Travelers Championship at TPC River Highlands on June 25, 2017 in Cromwell, Connecticut. (Photo by Maddie Meyer/Getty Images) 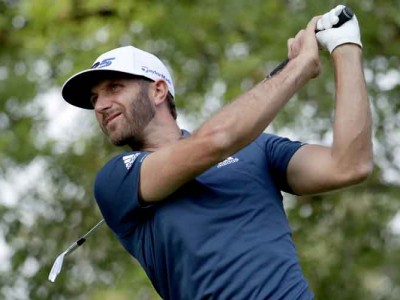 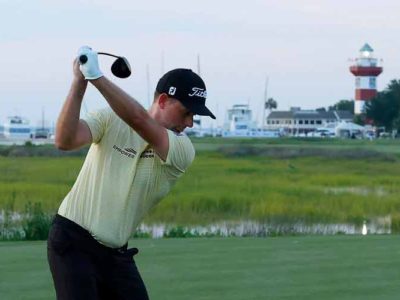