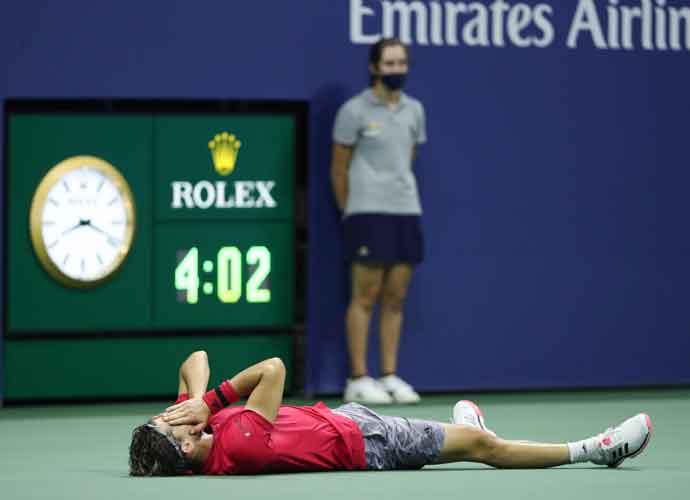 NEW YORK, NEW YORK - SEPTEMBER 13: Dominic Thiem of Austria lays down in celebration after winning championship point after a tie-break during his Men's Singles final match against and Alexander Zverev of Germany on Day Fourteen of the 2020 US Open at the USTA Billie Jean King National Tennis Center on September 13, 2020 in the Queens borough of New York City.

Sunday was the tennis equivalent of getting overtime in the Super Bowl or a game seven in the NBA Finals, with the U.S. Open men’s final between Alexander Zverev and Dominic Thiem going to a tiebreak in the fifth set with Thiem eventually winning out  2-6, 4-6, 6-4, 6-3, 7-6 (6).

In his post-match speech, Thiem reflected on his journey to the moment and his relationship with his opponent. “We started to know each other in 2014, when we both were ranked close to 100. We developed a great friendship,” Thiem said. “Then our rivalry began in 2016 [in Munich, Germany]. We made great things happen on the court and off since then. It’s amazing how far our journey brought us to share this moment. I wish we could have two winners because we both deserved this.”

Thiem did benefit from the strangeness of this tournament, most notably, when his opponent and tournament favorite Novak Djokovic defaulted earlier in the tournament when he unintentionally hit a line judge in the throat with a ball. “From the moment Novak was out of the tournament, it was clear that there’s going to be a new Grand Slam champion,” he said. “From that moment on, that was also out of my mind. I was just focusing on the remaining guys left in the draw.”

Thiem will try to keep the momentum going with the French Open beginning later this month.