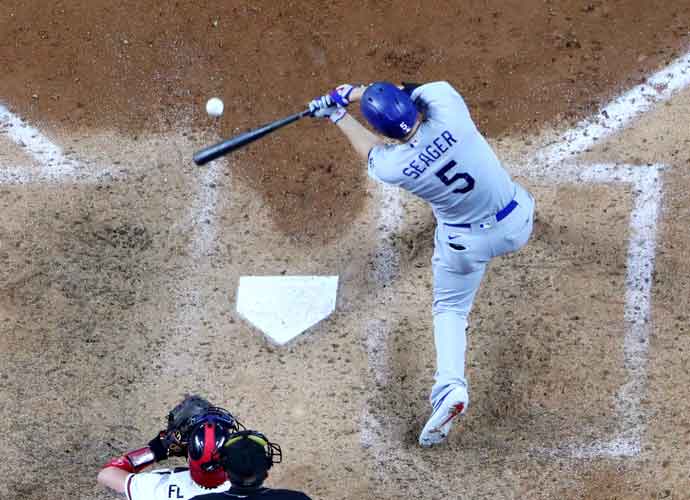 ARLINGTON, TEXAS - OCTOBER 14: Corey Seager #5 of the Los Angeles Dodgers flies out against the Atlanta Braves during the fourth inning in Game Three of the National League Championship Series at Globe Life Field on October 14, 2020 in Arlington, Texas.

After falling down 0-2 in their NLCS series against the Atlanta Braves, the Los Angeles Dodgers came out swinging in game three and made history in the process. Braking an MLB postseason record, the Dodgers scored 11 runs in the first inning topping 10-run innings amassed by four other teams — the 2019 St. Louis Cardinals, 2002 Los Angeles Angels, 1968 Detroit Tigers and 1929 Philadelphia Athletics, for the most in any inning in postseason history.

The progression of the inning’s scores goes as follows: Corey Seager got the Dodgers on the board with an opposite-field, run-scoring double. Will Smith followed with an RBI double to center. Joc Pederson and Edwin Rios followed with back-to-back homers off Braves starter Kyle Wright. Max Muncy, punctuated the scoring with a grand slam.

Entering the postseason the Dodgers felt like the prohibitive favorite to win it all with their odds only being +350 to win the World Series. In their first-round series, they maintained that aura of dominance by sweeping the Brewers but they have run into some complications with the Braves. Game two of this series marked only the fifth tie this season that they had suffered back-to-back losses. But it seems that they have gotten their mojo back.

“We know who we are over here,” Muncy said. “We’re a really good team. We kinda lost our footing these first two games, but we all know who we are. We weren’t worried about anything. And tonight we went out and showed what we can do.”