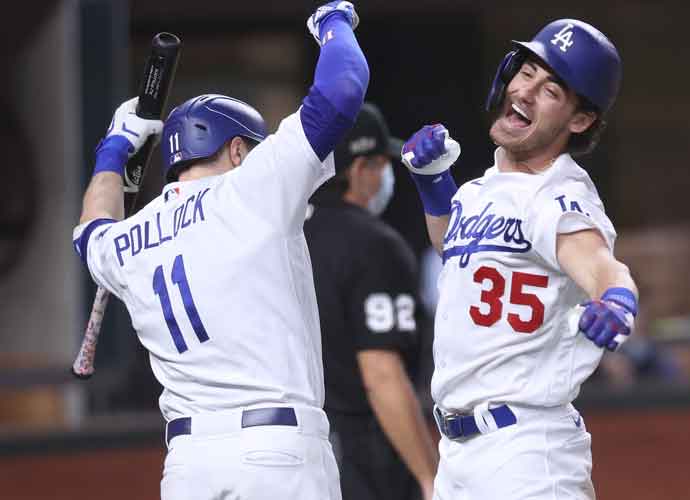 ARLINGTON, TEXAS - OCTOBER 18: Cody Bellinger #35 of the Los Angeles Dodgers is congratulated by A.J. Pollock #11 after hitting a solo home run against the Atlanta Braves during the seventh inning in Game Seven of the National League Championship Series at Globe Life Field on October 18, 2020 in Arlington, Texas.

In the Dodgers 4-3 game seven win over the Atlanta Braves in the NLCS there was a nugget of comedy when batter Cody Bellinger was celebrating his seventh-inning home run he appeared to have separated his shoulder after being a little overzealous.

Bellinger hurt himself in the celebration? pic.twitter.com/7or9FUUxla

Bellinger was joking around about it postgame since it was not serious, and he is going to play against the Rays when the World Series begins on Tuesday. “I hit Kiké’s shoulder a little too hard and my shoulder popped out,” Bellinger said. “They had to pop it back in so I could play defense. It kinda hurt. I’m going to maybe use my left arm (next time). I’ve never dislocated that one.”

Silliness aside Bellinger has been a great addition to the Dodgers, really controlling his at-bats and extending pitch counts. “Cody’s as talented as any player in baseball,” manager Dave Roberts said. “But I think this postseason is showing him the value of controlling the strike zone, winning the pitches, taking the walk and if they make a mistake, you can still slug.”

Game One of the World Series starts at 8:09 Tuesday Night and will air on FOX.